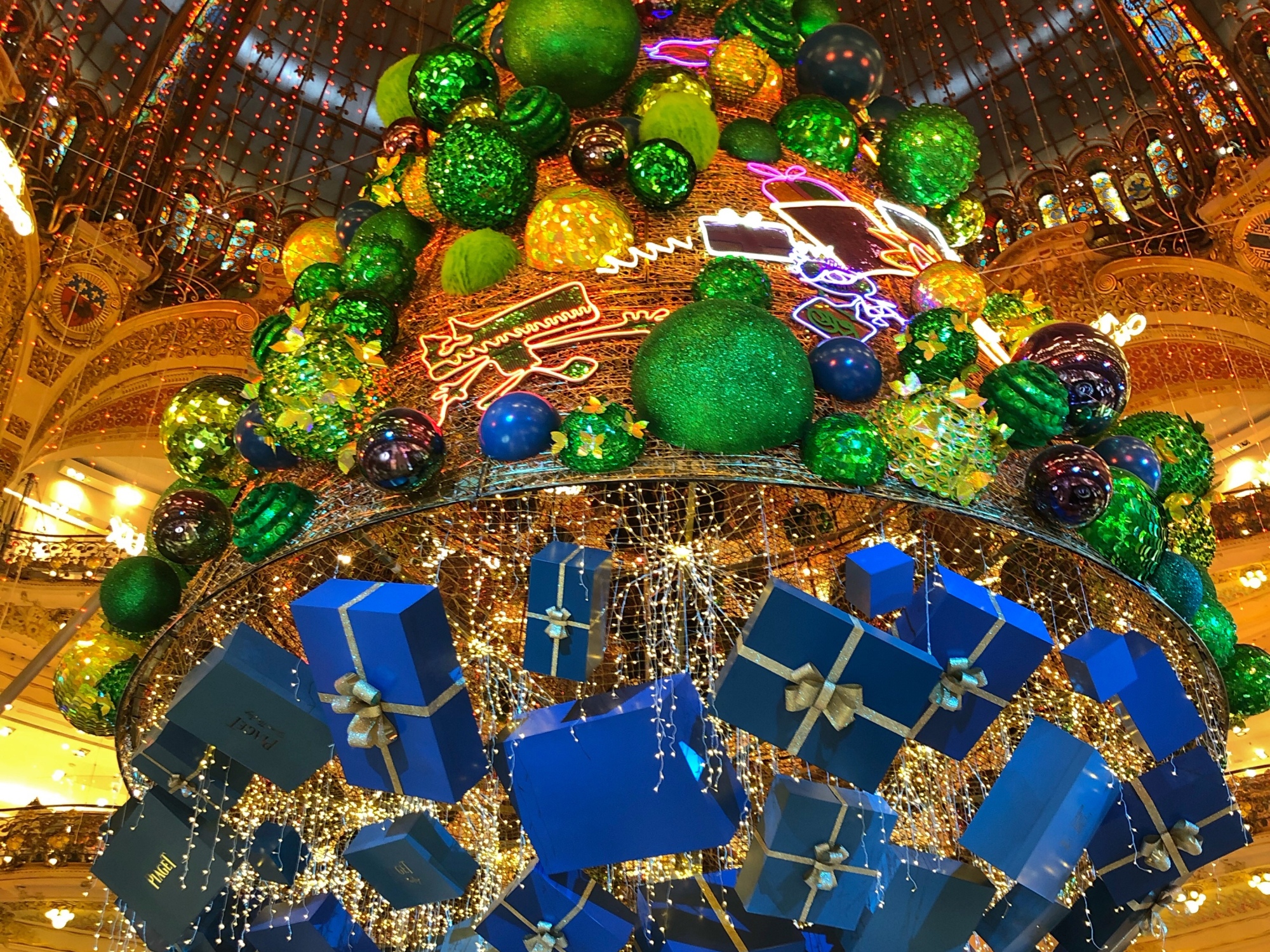 Today was intended for some shopping since we got in mid afternoon yesterday. We tried to sleep in a bit, but the workers striking at the hotel made that difficult. They’re camped out during the day in the front of the hotel and play the drums to maximize their annoyance to guests like us. They succeeded, I was pretty irked. It’s a public sidewalk and they don’t obstruct it, they just make a lot of noise and a bit of a mess. They were taking a lunch break when we left the hotel. Just wish they’d go away.

We walked down Rue du Faubourg Saint-Honoré towards Hermès and did some shopping there before going down the side street Boissy d’Anglas to Village Royale, which is a very nice “village” just a block down the street from Hermès. Home to a number of high end retailers on the ground floor and apartments and offices above.

If you didn’t know to turn into the doors of the entrance into the Village, you’d never know it was there. 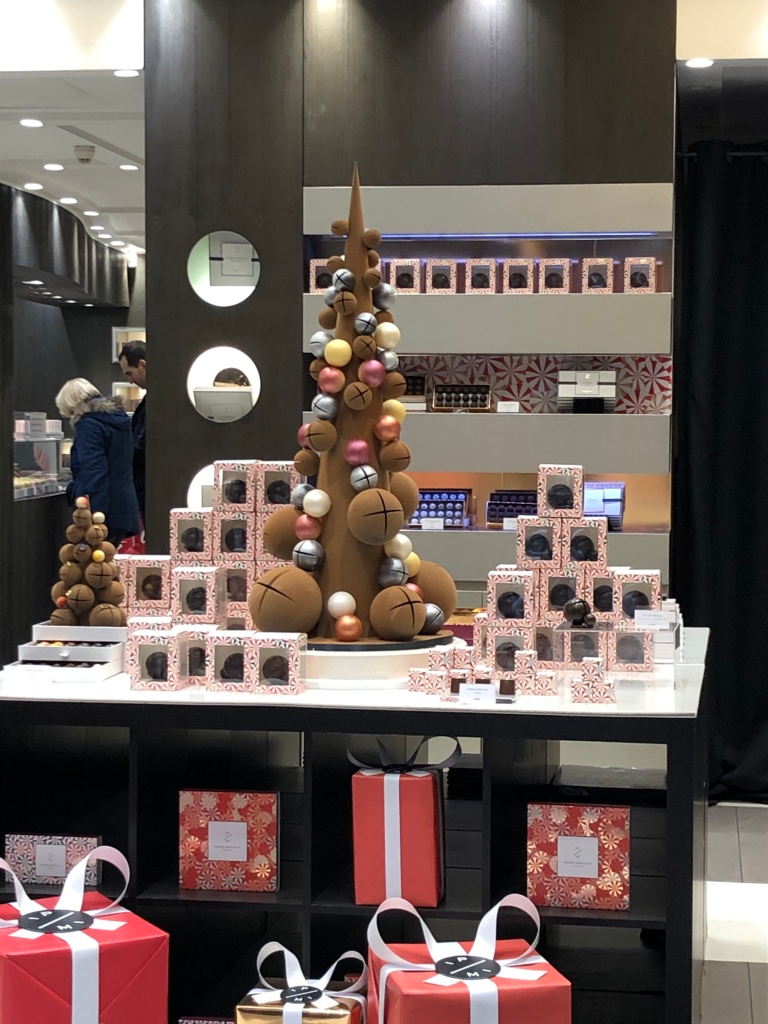 From here, we wanted to go to Galleries Lafayette, a large department store on Boulevard Haussmann. The “store” is so large it is actually three buildings, one for women’s wear, one for men and another for their food hall.

We weren’t there to shop, but to see the decorations. 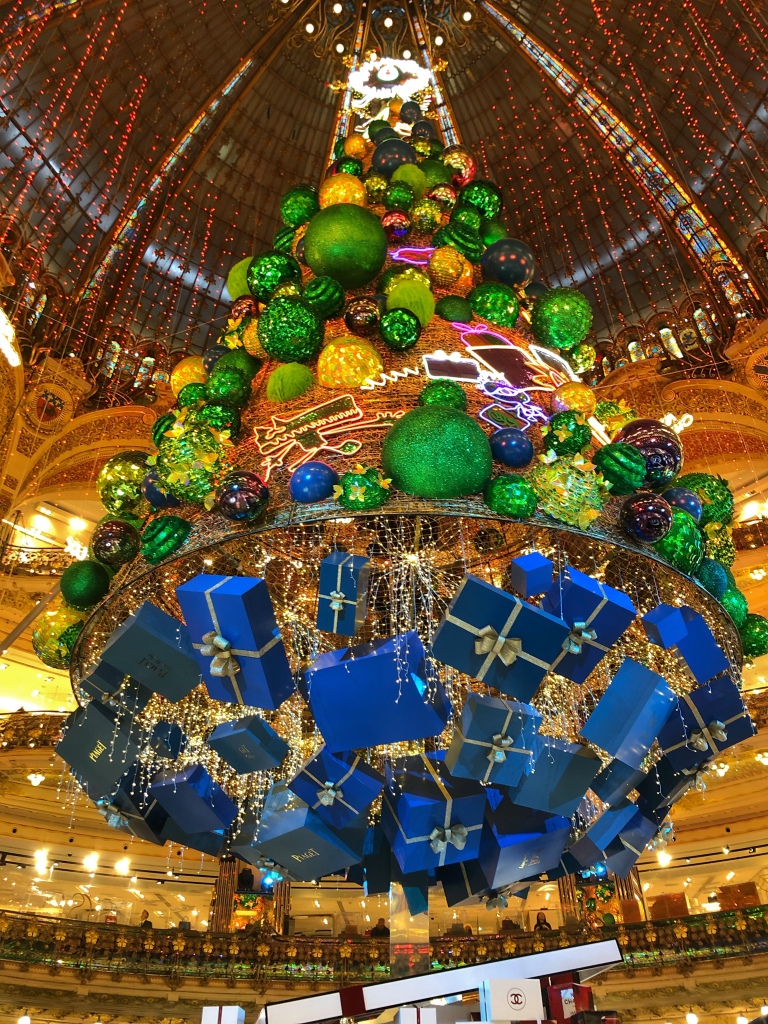 The ground floor is populated by “departments ” of all the various luxury brands. The periphery doesn’t seem to change, but the other boutiques could be moved I suppose, depending on how prime a location they want (to pay for). Chanel was located directly under the center of this spectacular “tree”. It’s so big, we had to go up to the second floor to get a good photo.

The ceiling of Galleries is an attraction in and of itself and there is a rooftop deck with a great view of the Garnier Opera and Paris. This post has some photos of the interior of the ceiling from a few years ago, while this post has some info about our visit to the rooftop last year. We could see people standing on the deck as we walked toward the store, but it wasn’t a great day for the deck.

We headed back to our hotel for a bit and to have dinner before going out to see the lights along the Champs Elysee. The Christmas markets that use to be situated along the Champs have been moved out to La Defense, a business/ commercial area about twenty minutes by Metro from central Paris. We visited these before they were moved and they weren’t anything special, certainly in comparison to what we’ve seen on this trip, so we’ll take a pass on these.

The Champs Elysee is a central axis in Paris, with the street ending at one end at Place de la Concorde , extending past the Arc de Triomphe and on out to La Defense. On a good day you can see from the Louvre down the Champs Elysee , through the Arc de Triomphe out to La Defense. This view is actually called the Axe Historique. Starting at the Place de la Concorde, going down the Champs, from here in the right, you will find the US Embassy, the (French) Presidential residence , the Élysée Palace. Further down on the left are two large exhibition/museum spaces (Grand Palais and Petite Palais), then the retail begins. Having been down that stretch oh so many times, we decided to spend our time at the head of the Champs Elysee and take photos from there.

Fortunately, there’s a small traffic island where people stand to take these photos, as the traffic can be extremely congested. If you were to turn around from this view, you would see the Place de La Concorde and the entrance to the Tuileries.

We stopped for a coffee and then headed back towards our hotel.

Cartier is wrapped up like a big red bow.

The news on the French demonstrations is that even though President Macron has now cancelled the gas price increases, the yellow vest protests carry on. This is not just a phenomenon for Paris, but has taken place in the other major cities in France and the protests are not confined to the fuel price increases. Link to French newspaper.

One thought on “Paris Day 2”