It started out to be a lazy kind of day. We got up late, ate breakfast late. Once outside, found a perfectly blue sky and temperature about 70. Beautiful day!

We’re walking over to rue Scribe, near Opera Garnier, to find the departure times for the Roissy Bus to the airport. Sadly, have to leave before long.

We stopped in at a Nespresso store just behind Opera Garnier. Even they have on-site security. If you aren’t familiar with Nespresso, they are a European maker of single serve coffee machines and coffee pods. This is a two story store, but they don’t carry the pods for one of our machines, apparently only made for the export market, so we’ll buy some for the smaller machine.

Despite it being nice outside, it’s not air conditioned in here and a bit warm.

One of the super sized department stores in Paris, it occupies several square blocks, with one block for men, another block for women and still a third for home goods. It’s an over abundance of everything. Each designer, cosmetic line, fragrance maker, including jewelers (including very high end), have their own department within the “Grand Magazine”. Smaller departments don’t necessarily translate into shorter waits.

The central core of the main store is stunning.

And if your wandering gets you thirsty, they have a champagne bar. They also sell Apple iPads, Apple Watch and iPhones (wait for iPhone 7). Rimowa luggage- need a €1,000 metal suitcase? Oh, and they have their own RER stop.

An overabundance of everything, including people.

Now on to le Jardin du Luxembourg. We needed to replenish our billets de Metro, so we bought une carnet (book of 10 tickets) from “le distributer” (ticket machine). The route to Luxembourg takes two Metro lines and a change to the RER (regional train).

The Jardin du Luxembourg is a large public park/garden which is also the gardens behind the French Senate (upper house of their legislature).

The French were taking advantage of the sun today. The park was crowded. The section of the grassy area that was “permissible” ( permitted) was packed with those getting some sun.

Stopping on the way out of Luxembourg, La Fontaine Medicis is very pretty. Shaded by trees with vines looping between them.

Next stop is dinner, but we’ll end up walking 0.6 of a mile to get to the Odeon Metro. It’s sometimes hard to believe you can walk so far underground and still be in the same Metro station, but in stations where multiple lines connect, “les correspondences” are sometimes long.

We’re headed to one of our favorite neighborhoods, rue Cler. rue Cler is primarily a market street, with all sorts of food (fruit, meat, cheese, seafood), flowers, wine stalls. There are other shops along this pedestrian street and a few small hotels. 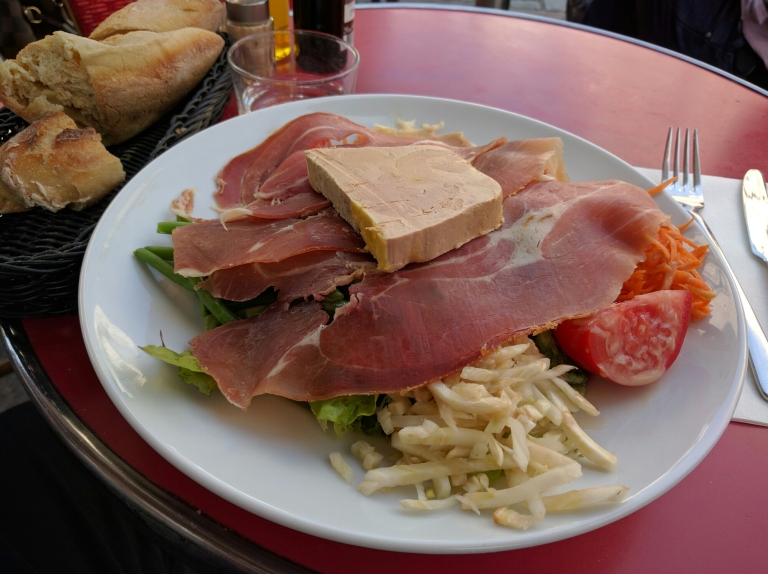 Sit outside at the Café du Marche, watch people, enjoy a great salad. The pâtés de foie gras is delicious. Across the way is a great boulanger (bakery) and down the street, a café that cooks up crepes with bananas and Nutella.

While there are certainly tourists like us here, the cafe seems to be primarily locals who stopped to meet with friends for a drink.

One thought on “Galleries Lafayette and Jardin du Luxembourg”