It is drizzling just a bit.This would have been the perfect day for a day at the museums, except the major museums are closed on Tuesday. Tomorrow, Wednesday, is our last full day in Paris before we transfer hotels to one near the airport for the return home.
We decided to take a trek out to the La Defense area , which is a straight route out from the Tuileries Metro stop (though it’s 11 stops). It is also the end of the line for this line of the Metro.

La Défense is an area outside central Paris that was redeveloped into an enormous office and shopping complex, the centerpiece of which is the Grande Arche de La Défense.

It is a rectangular (office) building, with the center open. It is on the same axis as the l’Arc de Triumph, visible in the far distance, down the Champs Elysee. If you have really good eyes (or a zoom lens) and it’s a clear day, you can see from the Grand Arche, through l’Arc de Triumph, to the Carousel du Louvres, to the IM Pei glass pyramid at the Louvre museum. Not today, though I can see the Arc d’Triumph.

There really aren’t skyscrapers in Paris proper; it would ruin the view, so I don’t know how they managed to build Tour Montparnasse (the only skyscraper in Paris), but any other skyscraper type building in located out of le centre ville (center of the city). La Défense is home to many such buildings, as well as an enormous shopping center (Le Quatre Temps). And….an Apple Store!

View from La Défense to Arc d’Triumph and Louvre.

There are some large pieces of ‘art’, a Merry go round (kind of cold for the day, but running. 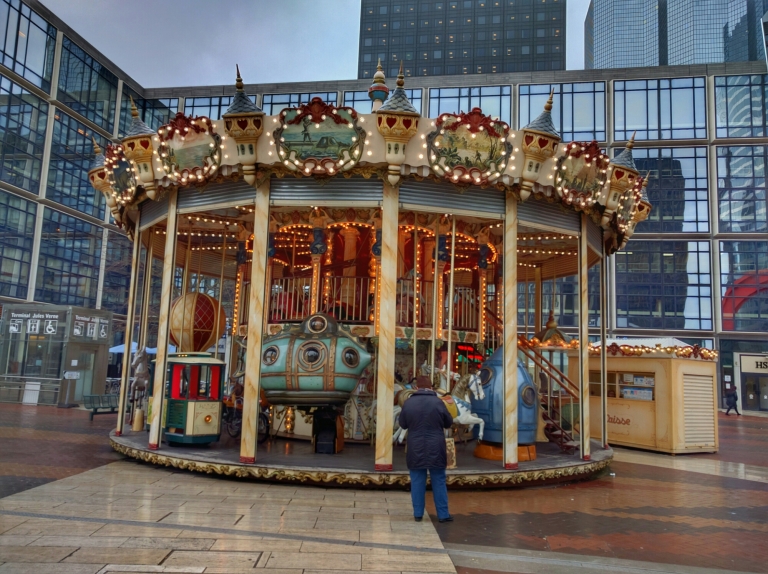 It’s virtually a city in itself. Indeed, I’m sure there are lots of people who live in the area and work here, rarely venturing into Paris.

We wandered about a bit in Quatre Temps, but it’s really just another (really) large shopping center. There are shops unique to France/Europe, and some we’d see in the US. Security was visible (police, soldiers, wanding coming into the center).

We bought another carnet (booklet) of ten Metro tickets (14.10€) from the automatic “distributeur” in the station down on level 0. This is more than just a Metro station, as there are correspondence (connections) to RER (regional rail), SNCF (national rail), as well as Metro. There were quite a few shops underground as well.

We got off the Metro earlier than planned at Franklin D. Roosevelt to walk down the Champs Elysee if it wasn’t raining, and it was not.

The Champs Elysee is a bit of a showroom for some of the automobile companies. Renault, Citroen, Toyota in particular have large showrooms featuring some sports cars and some concept cars. I don’t think their primary purpose is to be a sales showroom, but to showcase their cars and technology.

Here’s one of their zero emissions models. The top speed is rated at 45 kmh (27 mph). The video on the play loop made them look like they would fun to drive. Certainly more practical for urban driving/parking.

We walked down to Avenue Georges V and then to a fairly unique Hermes store (another stop on HWT). The exterior has a lot of beautiful wood decor. Inside, I don’t think the merchandise mix is much different than most with the exception of the hats they sell here, which you don’t normally see.

It’s a larger store than it appears from the front, taking up the side of a city block, and it has an upstairs.

We walked back up Georges V to the Champs Elysee and reentered the Metro, leaving at Tuileries and walking down rue Faubourg St. Honore. It’s late afternoon and we duck into a nearby Eric Kayser (boulanger) to grab something for dinner, since we only had a snack at Quatre Temps, before going back to the hotel.

Seems there’s often a strike going on in France. Good thing we will miss this one, and as far as I know, the airline pilots haven’t gone on strike again (pity if we had to stay a bit longer, don’t you think?).

And once we return to the hotel, I can only take so much BBC World News or CNN. Over and over again. I tune into my Plex server to watch the TV shows I missed while traveling. While I have some material synced to my tablet, watching over WiFi to a server that’s > 7900 km away works just fine.

One thought on “Rain Rain, Go Away, I’ve only Got One More Day”