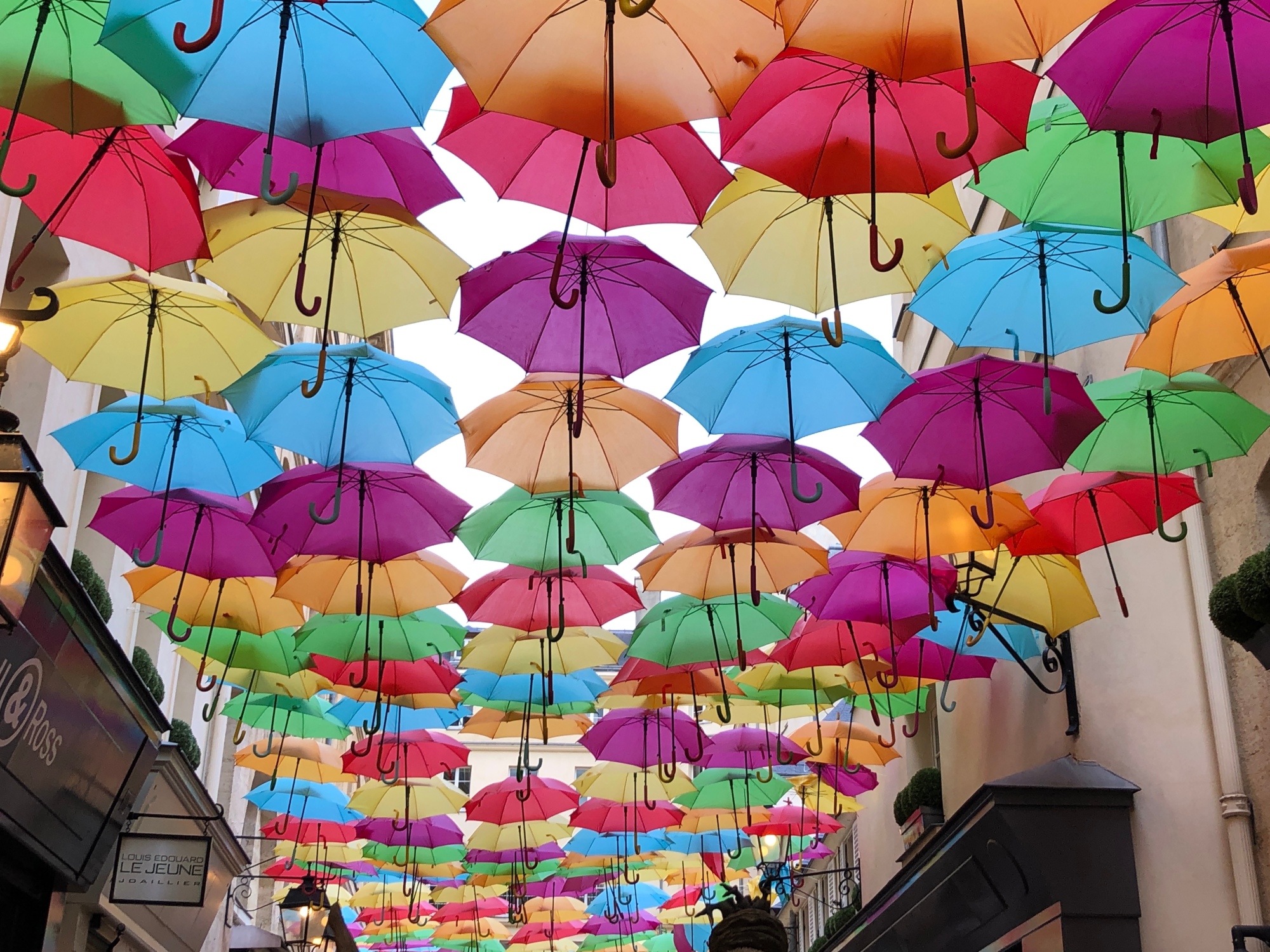 Up earlier than usual as we are leaving Lauterbrunnen via Interlaken/ Basel. The clouds descended this morning in Lauterbrunnen, it’s mostly cloudy, with some of the clouds hanging right at tree level up at Wengen (~4200′). It’s 54f , so a welcome cool temperature.

Bought tickets at Lauterbrunnen station for Interlaken 7.60chf/each (love TTP). There’s a warning by the railroad that those traveling without tickets are subject to a 90chf fine. Ouchie! Definitely not a high speed train, but it only takes 20 minutes to travel to Interlaken.

Somewhat fewer clouds as we make our way to Interlaken, along the same route we hiked Thursday towards Zweilütschinen. We should have about 40 minutes between trains at Interlaken, so we’ll have enough time to walk across to Coop for something for the trains. Stopped briefly at Wilderswil. Very pretty scenery in a small village (though still larger than Lauterbrunnen).

As we approach Interlaken, I can see see at the airfield they are preparing for a “somer” musicfest. These are very popular across Europe this time of year and tend to cater to metal/hard rock fans. One year we must have arrived in the midst of one as the Coop in Interlaken was thronged with those going/leaving. Now, many years later, I’m a “metal head” with a lot less hair.

In Interlaken, there are at least eight paragliders overhead when we exit the rail station. It’s a clear blue sky and perfect for this.

Our ICE train (German equivalent of TGV) from Interlaken to Basel is ready and though we’re reluctant to leave, it’s on to one of our favorite cities, Paris. A bonus is the German ICE (why in Switzerland?) has WiFi!

As we progress towards Bern (Swiss capital), then Basel (border city), the landscape becomes decidedly less alpine, rolling hills some low mountains, the trees not evergreens towering over you.

We’re constantly amazed when navigating through train stations at how much luggage many people carry. Some people carry two large (large enough for a small person to fit inside) suitcases and a backpack (or more). Without knowing how long they are away, all I can say is “good for you”, and quit taking up all the luggage space in the train! I long ago tired of lugging big suitcases up/down stairs, though subways, down streets. One small suitcase and a messenger bag. Two and a half weeks. Still more than I’d like. 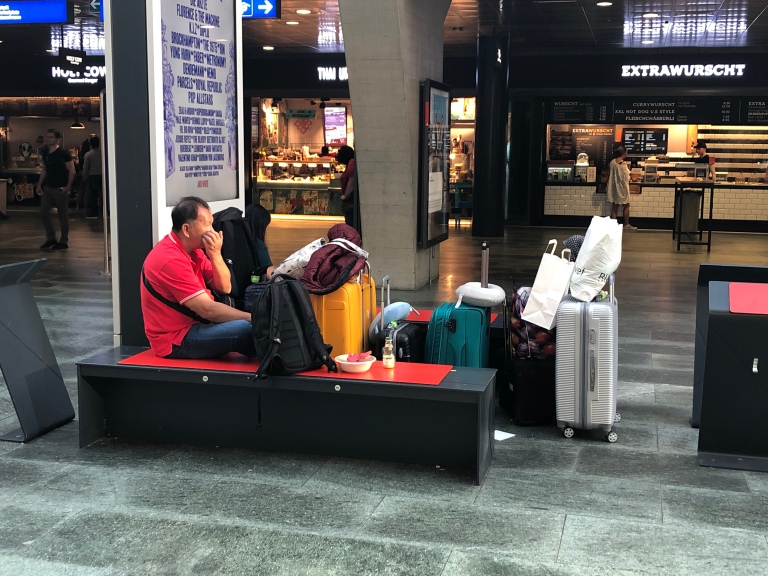 The train is passing by the Thünsee, expansive blue waters surrounded by a gently sloping shoreline. It’s no wonder that both the Thünsee and Brienzee are attractions for summer vacationers.

We have about 40 minutes until our TGV to Paris arrives, just a few tracks down from where we arrived. We used the train composition board to figure out where (section) our car will be. Another passenger came up to us before the train arrived to ask for the same kind of help.

Leaving Basel, we’re in France within minutes. On the (French) TGV Lyria, no WiFi 😐 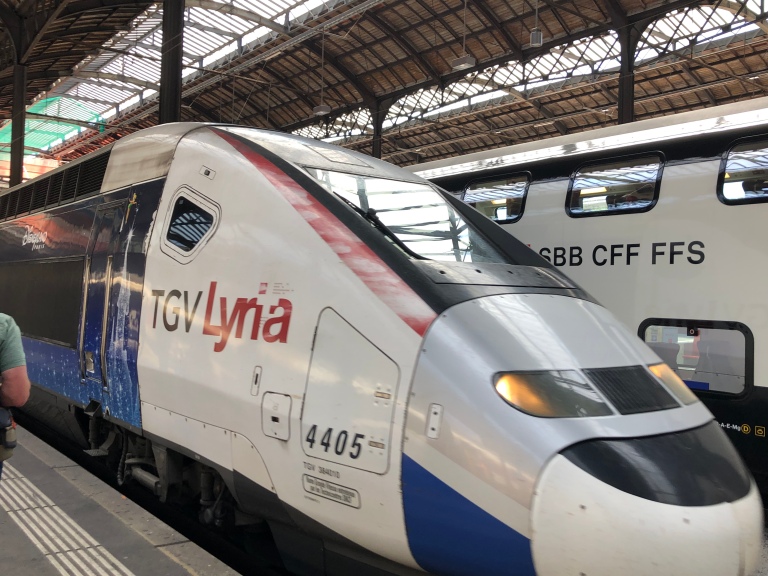 Outside Dijon, the TGV gains back some speed, but at 106mph, well below the 200mph we reached earlier. Now racing back up to 217mph, the scenery rips past; cars on parallel roads seem like they’re standing still. Except for slowing to go through cities (train would probably blow people off the platforms if they didn’t), can’t see why the speed will vary 30-40mph in a relatively short span, though probably averaging 180mph. Speed in an airplane at 30,000′ seems mostly without a frame of reference. When you’re ten feet above ground level, though it doesn’t feel ~200 in an absolute sense, you can better sense speed. 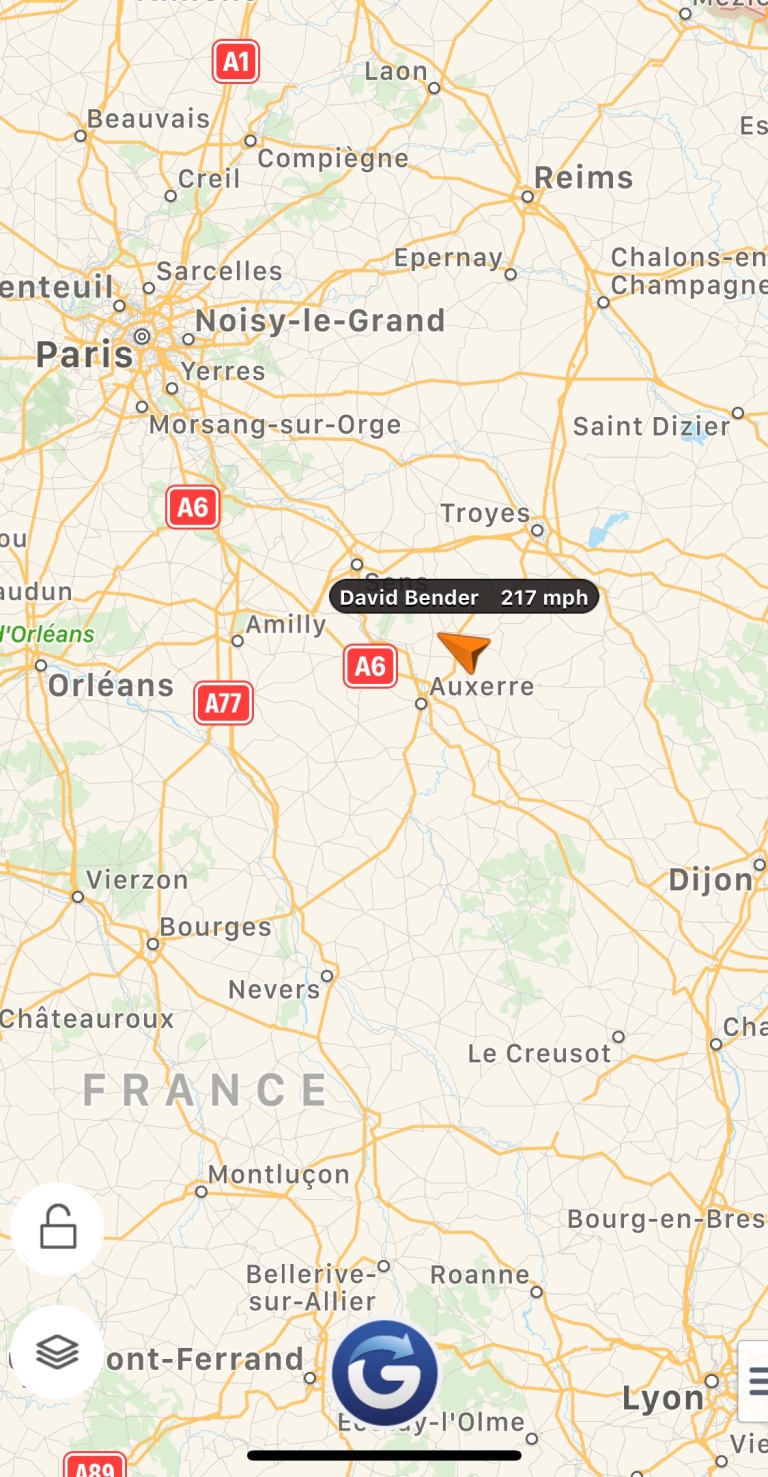 We arrived in Gare d’Lyon about 3:30pm after leaving Lauterbrunnen at 9am. We had a few short layovers between train changes, but the rest of the time was train time. The Metro ride to near our hotel was quick, two lines, four stations.

The really good news is that our hotel resolved their labor dispute that was going on when we were here in December. We were treated to a free morning “concert” every day. They were not (purposefully ?) very good, but purposefully very noisy. And our bathroom came equipped with a Robopotty.

The weather in Paris is very nice. Partly cloudy, 68 degrees.

After checking in, we stepped out to walk down to rue Royale and Faubourg St. Honoré while the shops are still open. Tomorrow (at least in France) most shops are closed on Sunday and we’re speculating that many will be closed on Monday (religious holiday). We stopped for a couple of macarons (not macaroons) at La Durée. 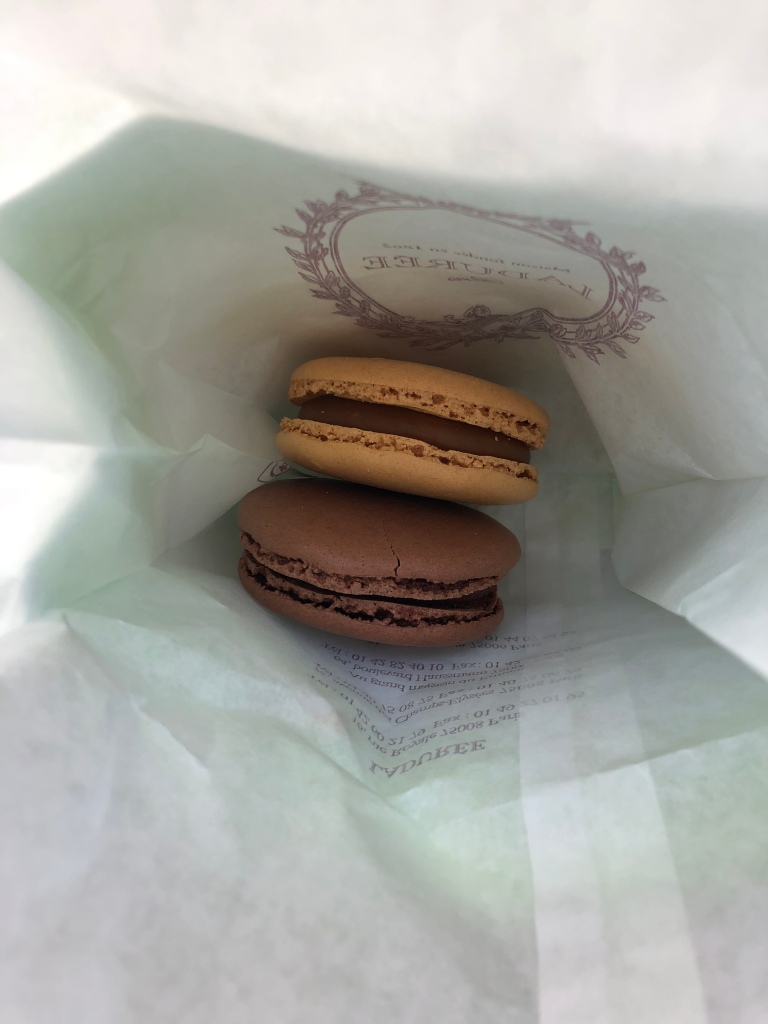 We walked through le Village Royale to see the Umbrella Sky exhibit that ends soon. 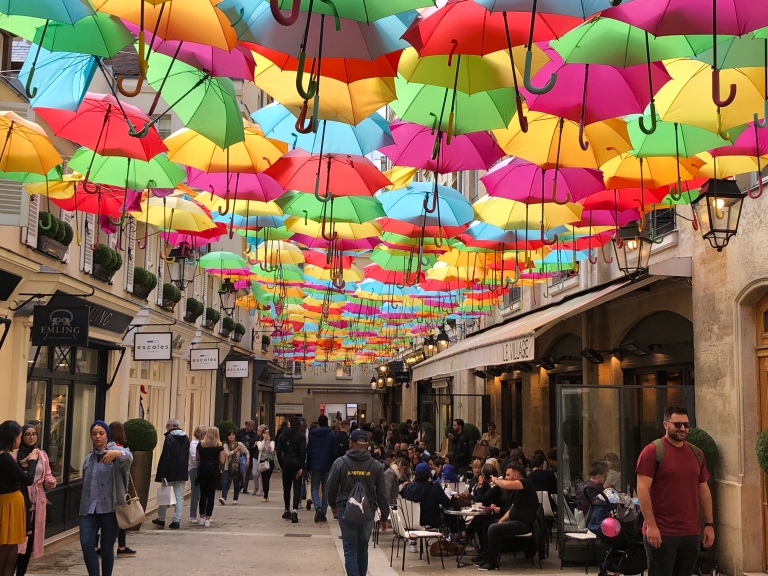 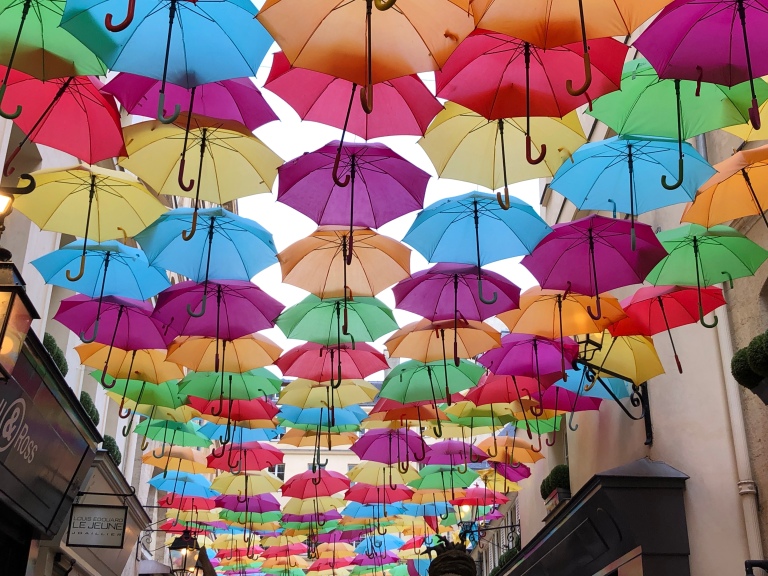 We mostly dodged some light rain on the way back to the hotel.