Thursday was spent at Kew Royal Botanical Gardens. I wasn’t able to make a post earlier as we got back to the room late and had to get ready to depart early on Friday. Got up at 4 am. We’re at the train station at 5:00am , though the Tube here doesn’t start until 5:36am. We are transiting to Paris today.

Kew Gardens was about 35 minutes by Tube from London’s Westminster tube station. Once you exit, you have to take the walkway over the tracks to get to the other side of the station, then it’s straight out and down a short street, to the Gardens’ entrance. The square around the rail station is populated with small local stores (bar, baker, butcher, natural foods store,cafe, etc), as well as a small Tesco and a Starbucks. The Gardens aren’t free though, there is an entrance fee.

The rail station is a mere 0.4 mi from the National Archives, home of the hatch/match/dispatch records for the UK. To the disappointment of my wife, our family Genealogist, we didn’t have time to visit. 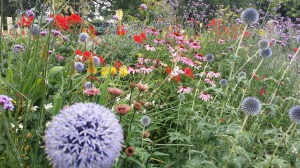 The gardens are rather extensive, with two large glass exhibit buildings (Palm House and Temperate House), though the Temperate House is closed for renovations. There are some other exhibit buildings as well (Lady Diana Conservatory is one) , including one of my favorites, the Lilly Pond House (rather humid). Check Flickr for the Lilly pad photos.

We visited the Palm House, which is almost immediately to your right,after you enter the grounds from the Victoria gate. As you’d guess, it’s all tropical plants. There’s a winding stairway to an elevated walkway. The tallest plants nearly reach the ceiling of this ~3 story building.

There is a huge variety of trees, from all over the world. And, depending on the season, the flowers are really beautiful. One of the ‘heritage’ oak trees was planted in 1773! It’s much larger around than 2 people could stretch their arms. There are a number of red oaks that are nearly as large.

One of the attractions is the Treetop Walkway. There is a winding staircase up to the top, or an elevator, but once there, you are (barely ) above tree top level. You have a view to the Temperate House and the surrounding Park. The elevated walkway takes you around a nice view of the gardens. 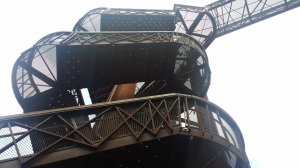 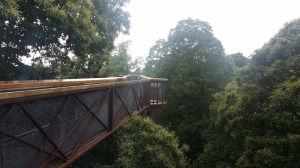 To fully explore the gardens and the exhibit buildings would take a complete day. We’ve been here several times before, and don’t have the entire day. There are a couple of nice cafes in the Gardens, as well as one in the Gift Shop.

Getting a little late in the day, we decided to go to a little tea shop in Kew called The Original Maids of Honour. Interesting bit of history.

One thought on “Kew Gardens”