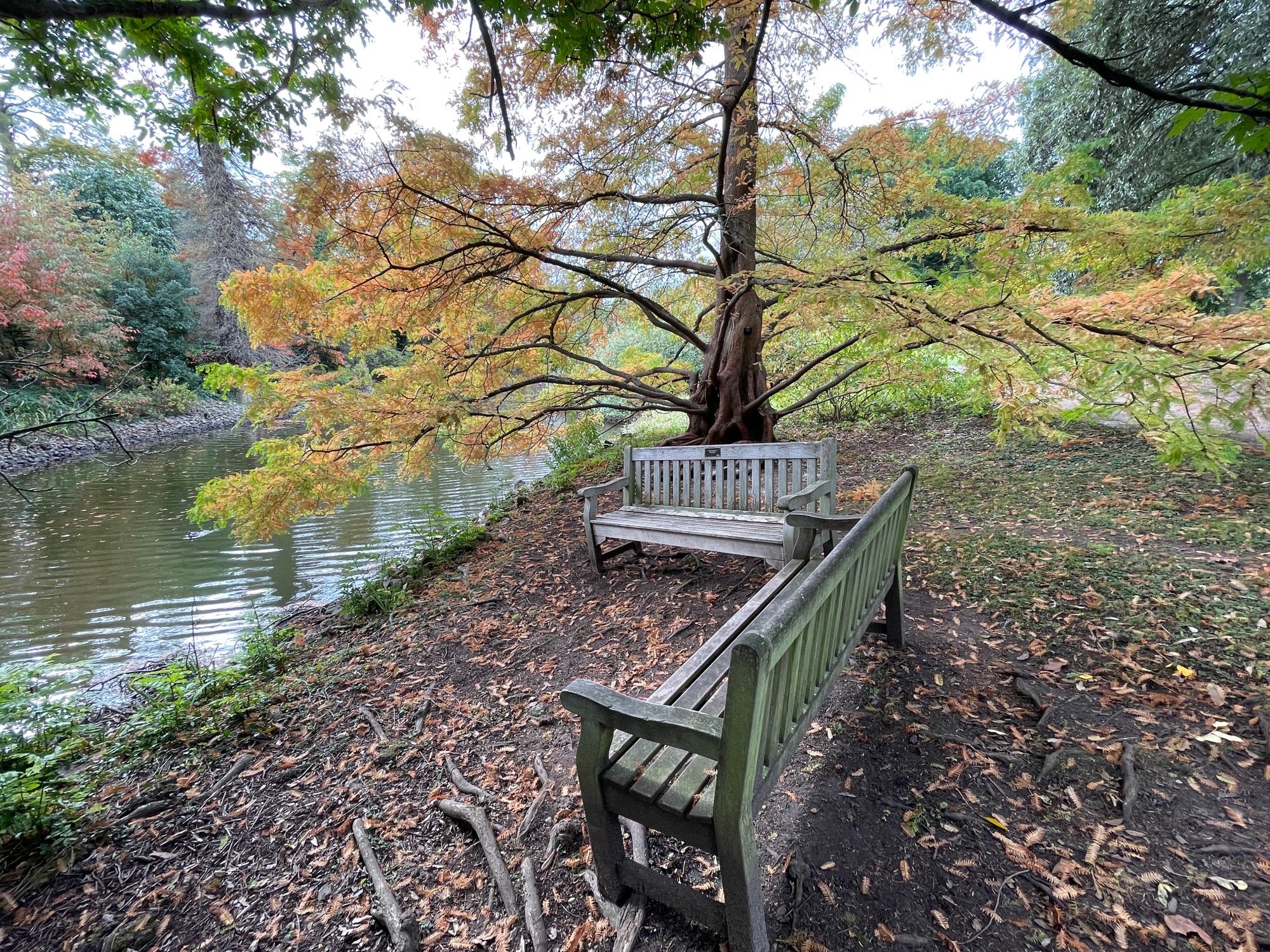 We’ve visited Kew many times before, in different seasons. So why go again? Just like the seasons change, the landscape and colors change with the seasons and they have new exhibits. Also, though we’ve visited many times, Kew (Royal Botanical Gardens) is large enough we still haven’t seen it all. Depending from where you start in London, Kew is about 45 minutes outside central London by Tube; we rode three trains on two lines, changing in two stations. What started out a little overcast (but no rain), cleared up to be a beautiful partly cloudy day with temperatures in the 60’s.

Kew is a small village with a quaint train station. On one side (inbound to London) there is a semicircular parking area outside the station populated with mostly local shops and a garden center, though there’s a Tesco and a Starbucks as well.

It’s just a short 4-5 blocks walk from the station to the Victoria Gate entrance to Kew Gardens. The leaves on the huge horse chestnut trees along the street to Kew Gardens are changing to a rust color and the village sanitation crew were out, working in vain, to clean up the leaves. As large as these trees are, they’ll be out many times. Some of the homes along the street leading to Kew look to possibly be duplexes; they’re tall (three stories) brick homes with a semi-circular drive in front. As school is out for midterms, even though it was midweek, there was a good queue for tickets. We bought online while standing in line.

While there are certainty walking paths , people walk wherever they wish and there are a lot of benches available to rest or ponder the natural beauty all around. Watch where you walk though, because there are quite a few geese, who spend their day eating and well, you know, leaving something behind.

The landscape staff is busy preparing for Christmas at Kew (something we’ve not been able to do) setting out wiring and structures for nighttime lights as well as the ongoing maintenance such an enormous garden requires. Kew has a research and conservation purpose as well, with its nearby Wakehurst, a wild botanic garden, with 500 acres of woodland and the world’s largest seed conservation project. Kew is a reservoir for plants from around the world and some of the trees here are hundreds of years old, like the pagoda tree, planted in 1760 (it’s old and at 261 years old, needs a little help).

In the spring and summer, Kew explodes with the color of its enormous variety of trees and flowers and in the fall, with the color of the changes to a new season. There’s even a treetop walkway that elevates you above the canopy of the trees for an amazing view of the grounds. There are specialized exhibits dedicated to plants of certain types of terrain (desert, mountains, water lilies, tropical) and rotating cultural exhibits like the ones from Japan now on view at the Temperate House and more permanent sculptures.

We left Kew about 4pm to walk down the road to have tea and scones at the Maids of Honour.

Then retrace our route back to the train station for the return to London. We always enjoy our days at Kew. We walked 7 miles today and it feels like it. A few more photos on my Flickr photo album.