15 July, 2015
Today we started out with an RIB (Rigid Inflatable Boat) ride down the Thames. We had reserved the 90 minute tour (London RIB Voyages). We’d taken a slower trip on a larger vessel down some of the Thames before, but this was a smaller, faster boat with 7 passengers plus 2 crew. The trip starts at the London Eye site and goes as far down the Thames as Canary Wharf, but not as far as the Thames River Barrier (maybe next trip). Crew does a nice job of providing some education about the sights along the river and a little excitement when they can speed up the boat (35 knots). Even having been down the river before, I saw some new things.
Added bonus, despite how it looks–it didn’t rain on us while we were on the boat. While there were a few rough spots as we sped up, it wasn’t enough to get anyone wet. You should take a trip like this if you have time, but be sure to make reservations in advance, as in the summer, it’s a popular attraction and the time slots get filled up. 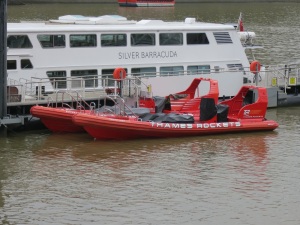 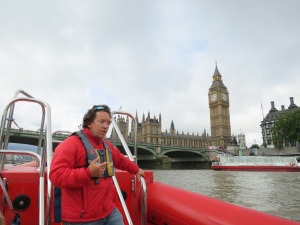 For lunch, we took the Tube to Marlybone station, near one of our favorite fish & chip shops. Sea Shell of Lisson Grove. The single piece of cod and the accompanying chips were enough for two (12£); sitting outside because the temperature is really nice. Marlybone is one of my favorite stations in terms of design. We came through here in 1999 when they had a steam engine on display, like you’d see in Harry Potter. Outside, the station has some lovely old ironwork.

We’re not far from Lords Cricket stadium, though we don’t have time to attend a match. Cricket is a sport I’ve just never understood.

Getting later in the afternoon, we hurried over to the Antiquarian Society in Burlington House to see their display of the Magna Carta Through the Ages. They have three copies of the Magna Carta, which show its evolution from its origins in 1215, through to 1225 and then how it became codified into English law. This is the 800th anniversary of the Magna Carta. In 1999, we saw another copy at the British Museum.

Just down from Burlington House, is the famous Burlington Arcade, home to many exclusive brands and an elegant shopping arcade dating to 1819.

From Burlington Arcade, we decided to have dinner at Belgo Centraal. The crowds on the street as we approached Leicester Square were massive. Nothing going on we could see, just a massive number of people. The area in and around Covent Garden is usually very crowded, but we weren’t even to Covent Garden yet.

Belgo is known for its moules (mussels), and having been here before, we know that too. So we’ll have a pot of moules with some Frites (French fries) , and a nice Belgian beer. Did I mention that Belgo’s cooking and dining area is underground? The entire restaurant, except for reception and a small waiting area is underground. Belgo’s sells a wide variety of beers.

After dinner, we walked around Covent Garden. Surprisingly, no mimes performing today. There are usually a lot of street artists on the scene, but not today. See the 2009 album on Flickr for some examples.
There were just a couple of street artists/magicians around the central part of Covent Gardens.

We found that the Covent Garden tube station was exit only, so we had to walk back to Leicester Square to catch a tube back.