We’re off again for a trip between Thanksgiving and Christmas to see some of Europe’s Christmas markets, something that has been on our bucket list for a long time. Work kind of got in the way in the past, but that’s not the obstacle it once was. This is European trip number 34 for us. 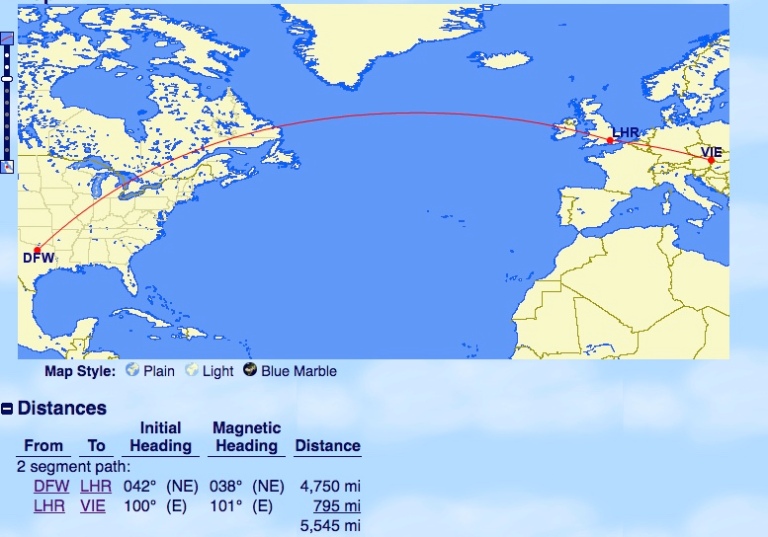 After a long layover in London, we’ll continue on to Vienna. This won’t be an extended trip, but even if it were, it isn’t possible to visit all of the remarkable Christmas markets in Europe in one trip, so maybe the bucket will get partially filled.

Without exhausting ourselves, we plan to visit five cities’ (Vienna, Prague, Nuremberg, Heidelberg, Paris) Christmas markets across four countries (Austria, Czechoslovakia,  Germany, and France). Many cities have more than one Christmas market and we’ll squeeze in as many as we can. Between the flight time, the layover and the time changes, it will be an exhausting first day’s travel to Vienna.

Regrettably, these aren’t all the short or direct train trips the lines suggest, with diversions and train connections. Some of our trips are scheduled on the high speed ICE (Intercity Express) trains.

The trains (usually) run on a tight schedule, as connection times between trains can be as little as five minutes. Delays can be disastrous and we’ve skirted a few; every traveler has probably experienced some. The worst one for us took place many years ago when our night train from Paris to Frankfurt was delayed and we arrived in the Frankfurt train station as our plane was leaving the airport. Getting home on “free” tickets was a challenge if you miss your plane. We managed to leave on separate airlines, hours apart, to arrive in the US in different cities, hoping we could connect to get back home. You can imagine my in-laws surprise when I called them on landing and asked if they had heard from their daughter (who had our two year old son with her). We all got home OK, but lessons learned. Learn to be flexible.

We spent four hours in the newly relocated and expanded American Express Centurion club, where we had a pre-flight massage and a manicure. Traveling is hard work 😉. Despite being somewhat larger, it seems just as crowded. Eat, drink, repeat.

The flight over to London, where we have a long layover, was well, uncomfortable. It looked like nearly every seat was taken and with seating 10 across in coach, you wedge in.

Here at Heathrow, at noon, it’s a grey day with a bit of light rain that doesn’t look like it’s hindering air traffic. We found a lounge in which to wait for a few hours, but we’ll probably go out and browse the shops.

The newspapers are full of news about Britain’s Brexit negotiations with the European Union. Sort of like the US presidential election; it was a hotly contested battle, and both “won” something we don’t really want. Brexit day is approaching on March 29, 2019 and the deal The PM has reached must be ratified by Parliament. The opposition is pushing for Theresa May (Prime Minister) to set a date when she’ll step down and she’s pushing every button to convince the MPs to accept the deal. It’s still possible they won’t have an agreement come March 29th, which places trade deals as mundane as chemicals for Britain’s water treatment for drinking water at risk of delay. The mandate of no hard border in Ireland between Northern Ireland (part of the UK) and the Republic of Ireland (a sovereign nation) is a big sticking point. Even Trump is sticking his foot in the mess by claiming that Theresa May’s deal could endanger a US-UK trade pact. Trumpy isn’t a fan of the EU. Brexit is a contentious and divisive debate within government, who are trying to honor the results of the referendum to leave the EU while retaining trade flexibility and regain control over immigration.

We left the lounge (they allow you three hours) and walked out to the open seating area, surrounded by a phalanx of shops. Maybe the Heathrow loyalty card will get some use, but not by me. We’ve been up for 24 hours.

We arrived late, as expected, in Vienna. We’ve never flown into this airport, so for transport to the city, my wife had scouted out the low cost options. We’re taking an SBahn (Schnell = fast, Bahn=train) for 4.60€ (about $5.30). Not fast, but very cheap.

In the stadtmitte (city center) we change from the SBahn to the UBahn (U = unter, underground ) for about three stops and then a short walk to the hotel. It appears we won’t have to sleep in the doorway tonight 😉. Finally, at 11:45 pm, we arrive on Tuesday after departing at 8:30pm on Monday.

Tomorrow, Christmas markets! There’s one directly across the street from our hotel.

One thought on “Planes, Trains and Christmas Markets”