Along the Champs-Élysées. A shady walk is welcomed on this warmer summer day.

We started our day with a trip to the “Mothership”. After hearing about the lines outside of the building, starting before dawn (to be fair, only if you want an appointment for the lottery to buy a purse). I was only a little surprised that by noon, there were no lines outside

or inside. It was so much less crowded than many times in the past. No throngs of women two and three deep at the scarf counter, no people standing in line with suitcases. 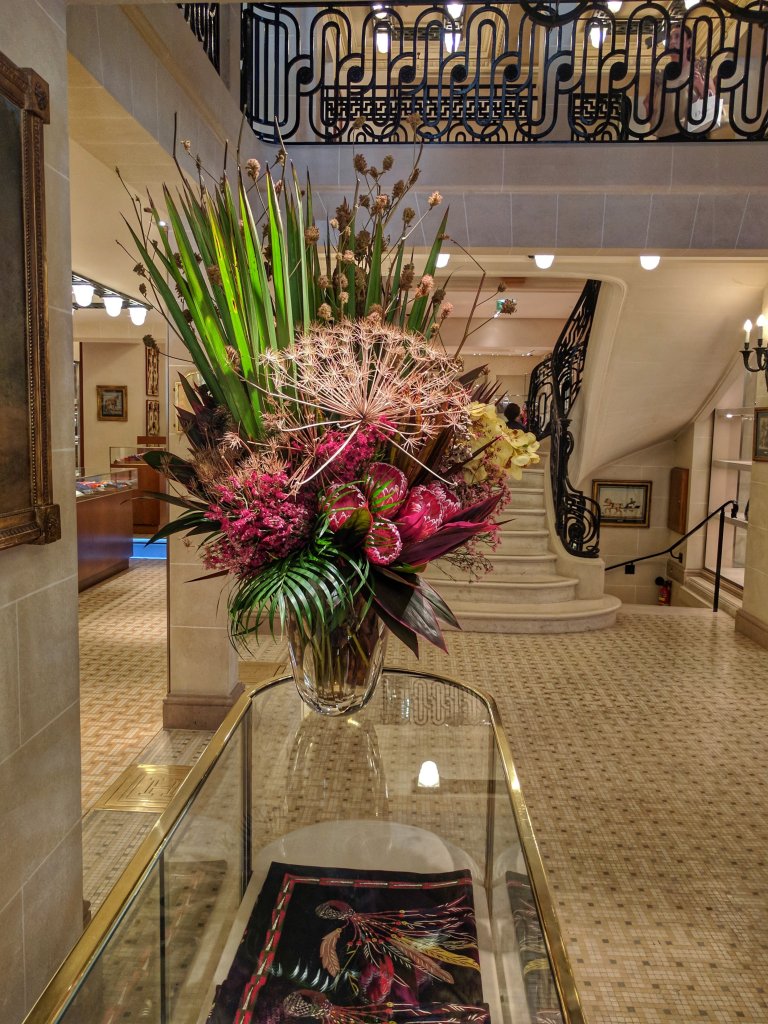 Only one relatively small achat (purchase).

We walked down past the American Embassy where I learned it is forbidden to take photos, at least where the gendarmerie can see you. They made me delete one from my camera (but not my phone 😉)

After Hermes and my encounter with the gendarmerie, we took the shady side of the streets down to the Champs-Élysées. Busy as usual and we do notice more security presence, but not overwhelming. We bought une carnet (book of 10 tickets) for the Metro to take it near the Tuileries and Angelina. For most purposes, the Metro is the most efficient and inexpensive way to get around the city, avoiding traffic and parking issues.

While the line to Angelina was too long for us yesterday, today it looked bearable. Angelina is a tea room with undoubtedly the thickest hot chocolate (L’Africain) you’ll likely find. It’s also not cheap; $9.65 per person. They have many other things you’d expect in a French tearoom, but we come here for that.

It comes with real whipped cream, so you know it’s great for diets.

Angelina faces rue Rivoli, which runs parallel to the Tuileries. We walked over to the Tuileries for the first time on this trip, though we’ve been here many times in all seasons. There are several large parterre d’eau (water ponds) with fountains in the park. Often (but not today) there is a man who rents little sailboats for the children to sail in the pond. Quite colorful and fun to watch the children intent on sailing their boats.

From the central walkway in the Tuileries, you can turn one way and look down the Champs-Élysées to the Place Concorde (with the Egyptian obelisk) in line with the Arc Triomphe then further down the Champs-Élysées it to La Defense and the Grand Arche (an office building in the shape of the Arc de Triomphe). Look the other way and you’ll see the Louvre Carousel and then the Louvre itself. This “Axe historique” connects many famous landmarks in one line of sight.

While on the side of the park of rue de Rivoli there are amusement rides, as you move further into the park there are many shaded walkways where there are green metal chairs occupied by people relaxing, playing a game of Monopoly, watching their children chase the pigeons. There are a few cafes situated under the shade of the marroniers (European horse chestnut trees).

Tomorrow is our last day in Paris