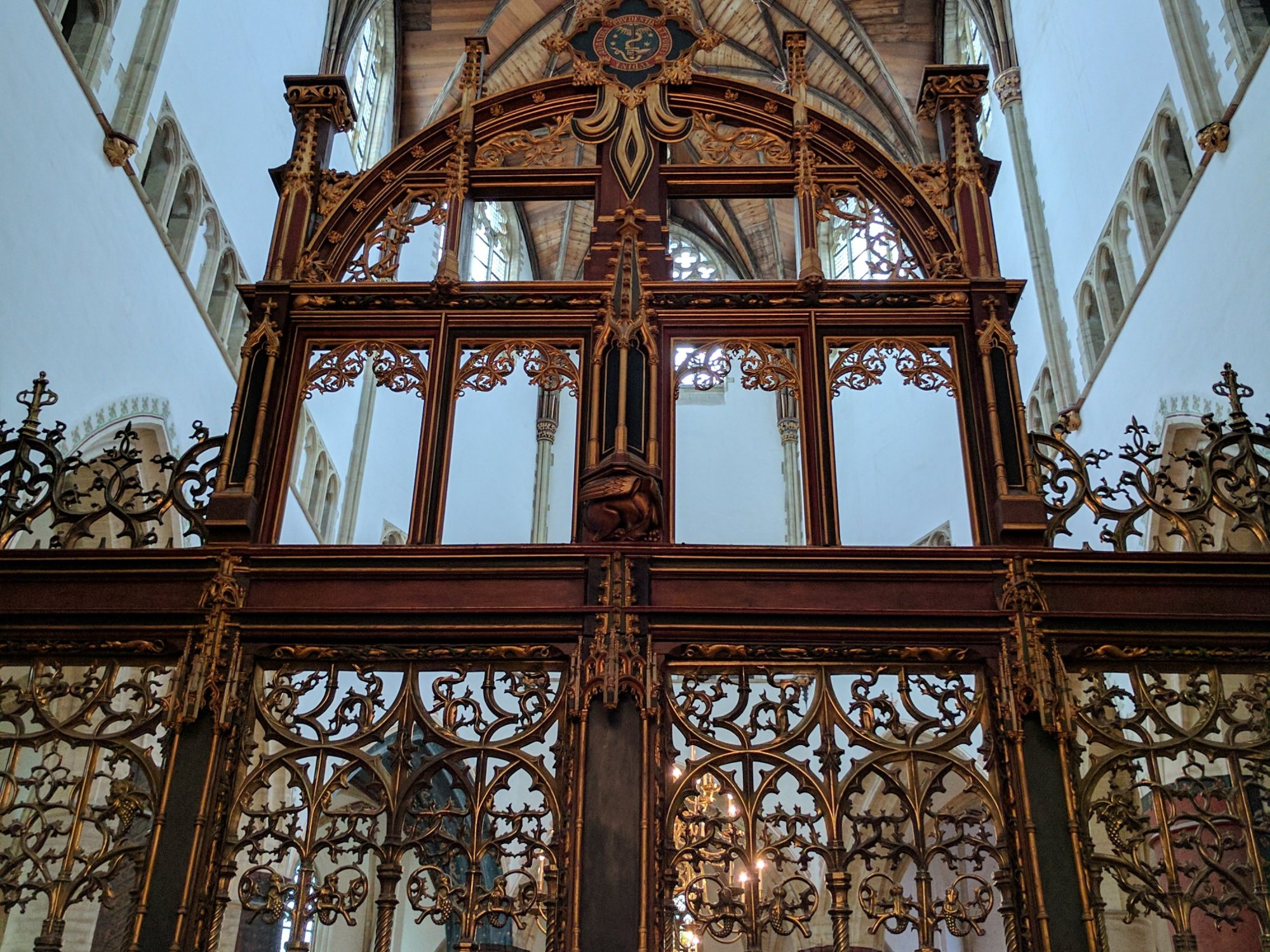 On the recommendation of a friend, we took a short trip out of the city (15 minute ride on the train) to Haarlem.

We took a tram to the train station. A first time experience: the conductor asked two people sitting in seats reserved for those needing assistance, to get up for us.

Not too embarrassed to take the seat though.

The Haarlem station has some beautiful old wood paneling around doorways and ceramic decorations above portals.

The center of Haarlem’s old town, the Grote Markt is but a ten minute walk from the station.The Grote Kerk (Grote=big, Kerk = church) , St. Bavo cathedral, dates back to the 14th century and has seen it passed between different denominations of Christianity, damaged by fire and struck by lightning, still towering high above Haarlem.

The entire floor of the cathedral is made of gravestones, some 1,500 of them; some dating to the 15th century. The gravestones are largely not legible after the many thousands of feet trodding over them in the course of the centuries. The present church was constructed between 1347 and 1538. 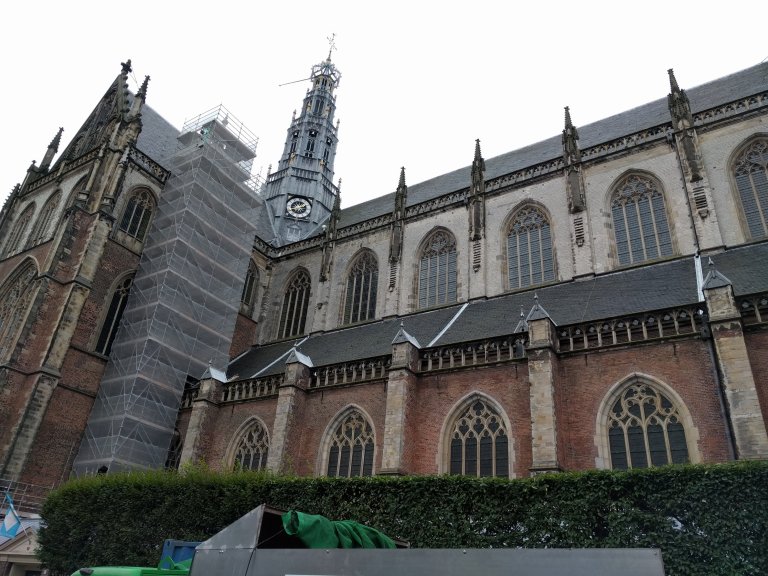 The pipe organ was once played by Handel and Mozart. 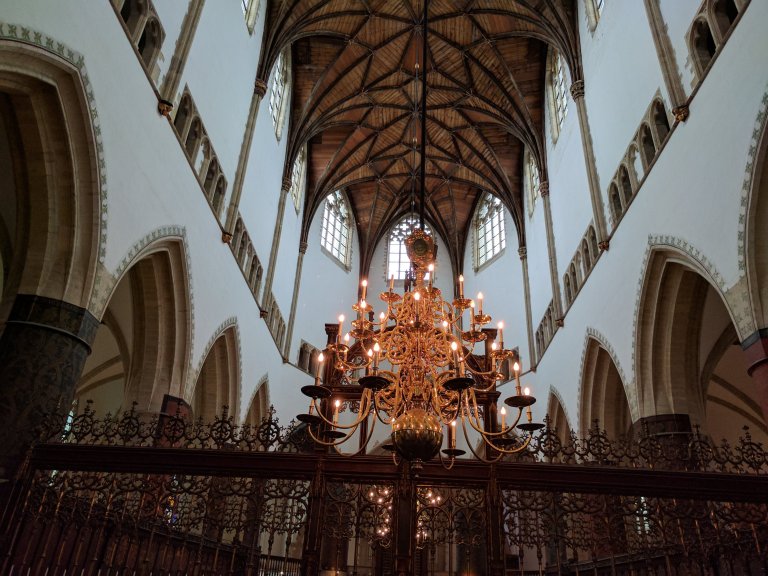 Dog Whipper’s Chapel(below). The Dog whipper was charged with keeping order over the dogs worshipers brought as well as any unruly worshipers. 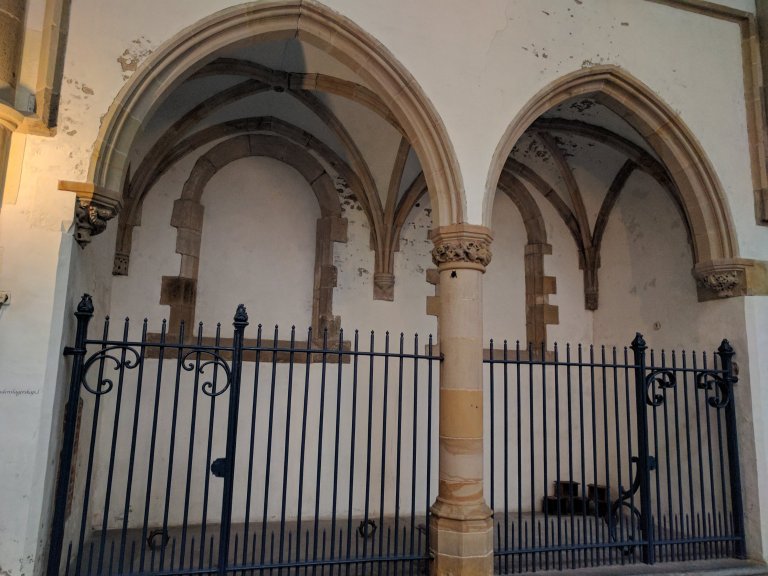 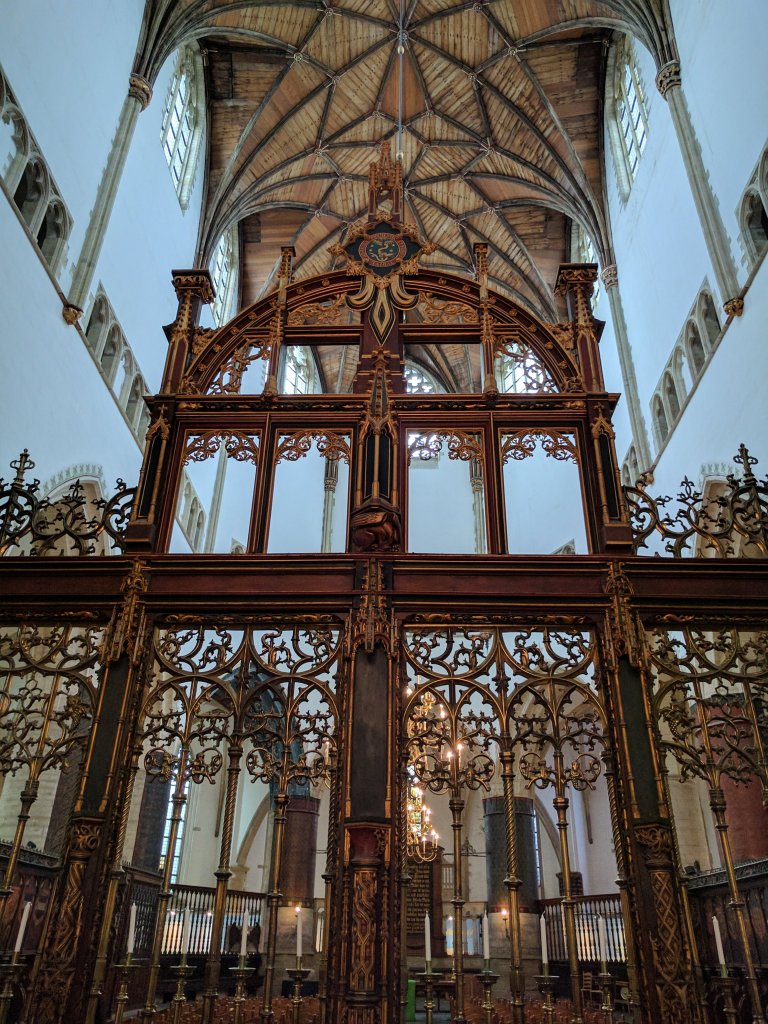 There is so much to see here and I’ve posted more photos on Flickr and Instagram. It’s one of the most beautiful cathedrals we’ve visited.

After spending quite a while here, we emerged to find it was lightly raining, but with umbrellas in hand we decided to (finally) see a Dutch windmill. It was about a 15 minute walk, but in the general direction we’d end up walking to get back to the station. The windmill sits on the Spaarne river, which ultimately empties into the North Sea. Finally, I get to see a real Dutch windmill!

It’s possible to climb up into the windmill, but with the rain, we decided to take photos instead. The primary purpose of windmills was to use the power of the wind to pump water out of the lowlands, beyond the dykes, so the land could be farmed and cities and towns not be subjected to continual flooding.

While we stood taking photos, a queue of about eight sail boats lined up waiting for the drawbridge to open. This bridge swung to one side rather than up, in the middle.

One thing that immediately strikes you when walking through the city is how much quieter it is than noisy Amsterdam. The tempo of the city is so different.

Back in Amsterdam, we took a tram part way back to our hotel to the Metropolitan, a desert shop near Dam Square. We had a warmed-up waffle with Nutella. They have a variety of diet busting options. One item we bought at a grocery store was Stroopwafles. A Stroopwafel is a waffle made from two thin layers of baked dough with a caramel-like syrup filling in the middle.

2 thoughts on “Haarlem, Grote Kerk and a Windmill”