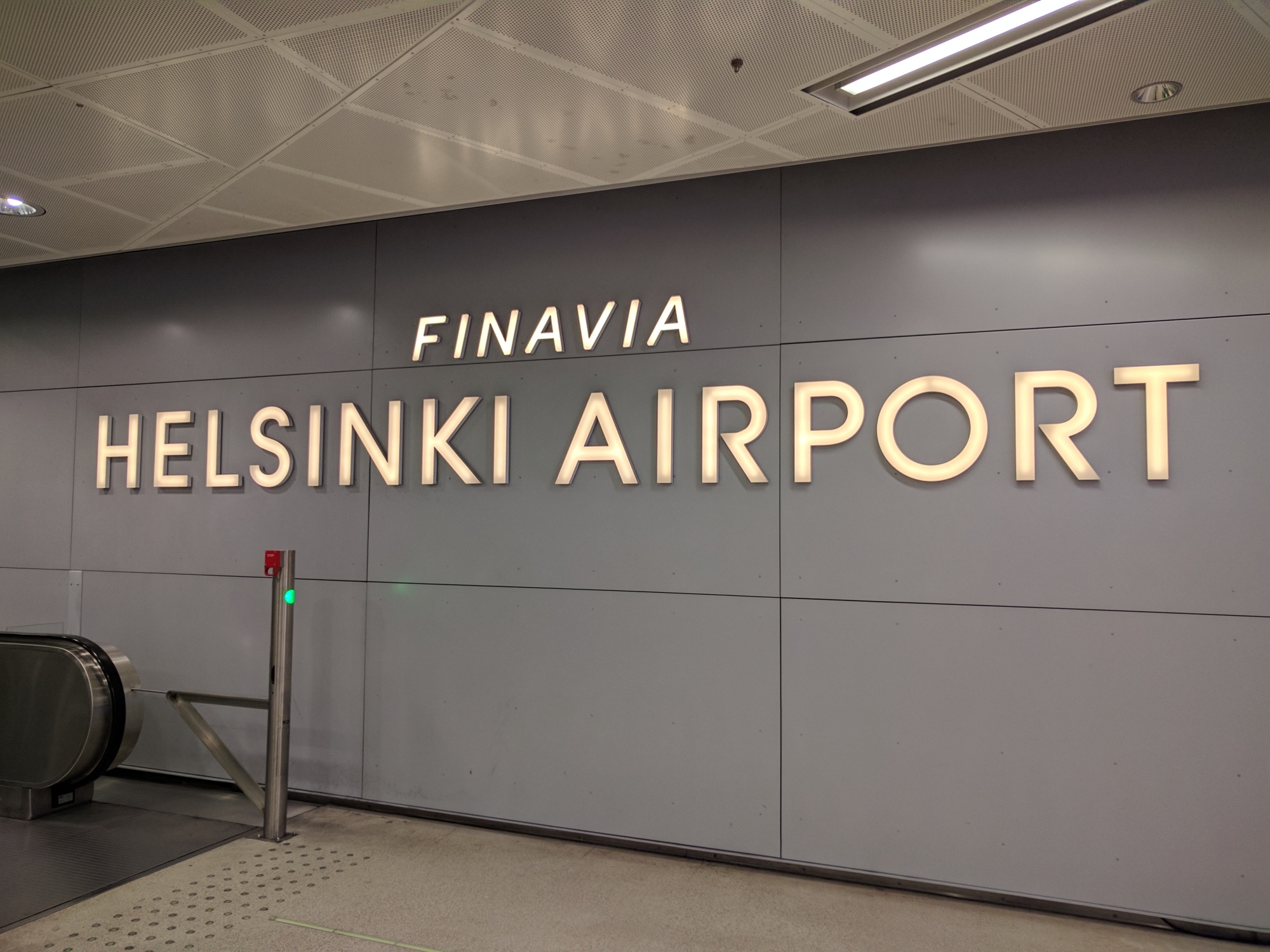 Sunrise in Helsinki was 5am and sunset was 10:52pm yesterday, 16:51 worth of daylight. There was a tour bus downstairs loaded up and ready to go at 6am. We went that route on our first trip to Europe in 1981. Marshalling a bus full of tourists can’t be easy, but it’s bags out the door at like 5am and be on the bus at 6. Once was enough.

One thing that struck me in being in Helsinki was the lack of security through the visibility of police/army, like we’ve seen in other large cities. Hopefully, this is a reflection of the reality rather than a lapse. One of the cities we’re going to visit soon had a terror incident this past week.

It’s a beautiful day outside and 61 degrees.

The airport train departs at 6:31 am and it’s a 30 minute trip to the airport. Still surprised at how big the airport is. Check-in is pretty quick if you use one of the kiosks, but a huge line if you don’t. We don’t have an option to carry on the suitcases as there is a 10kg limit. 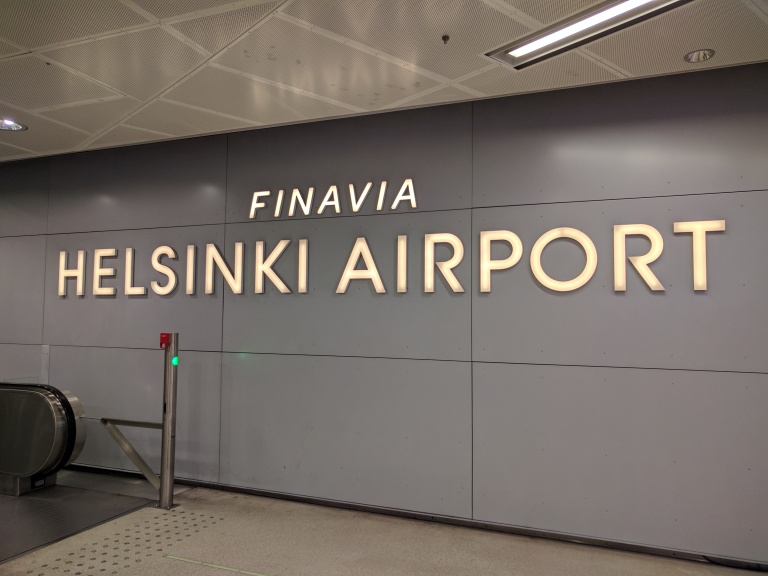 Not surprisingly, there are some airlines we don’t see often or at all in our home city. 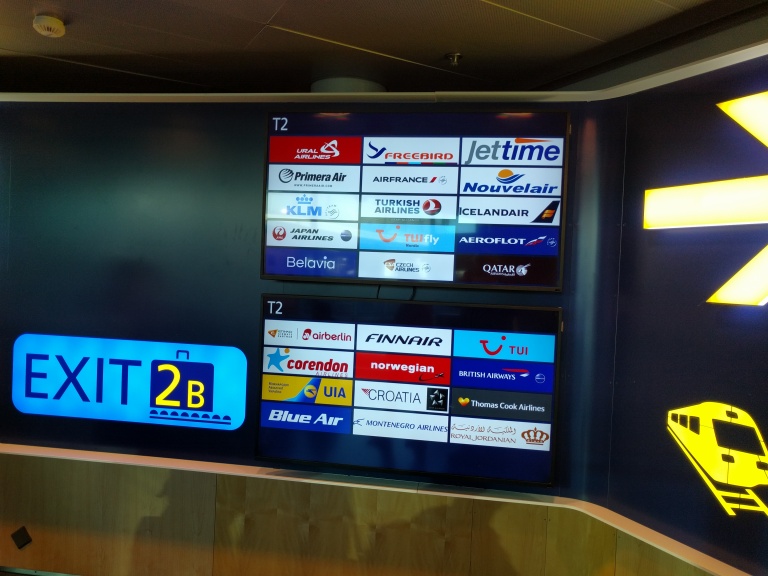 We spent a little time at one of the lounges to get something to eat before it was time to hike down to the gate. Airside here is really rather nice, with a lot of restaurants and shops. We didn’t need to go thru customs/immigration since we’re on an intra-European flight. Our flight goes from Helsinki to Stockholm, where we have a small layover, before taking another flight to Copenhagen. We are a little familiar with Stockholm’s Arlanda airport when we visited there last year on our trip to Iceland. 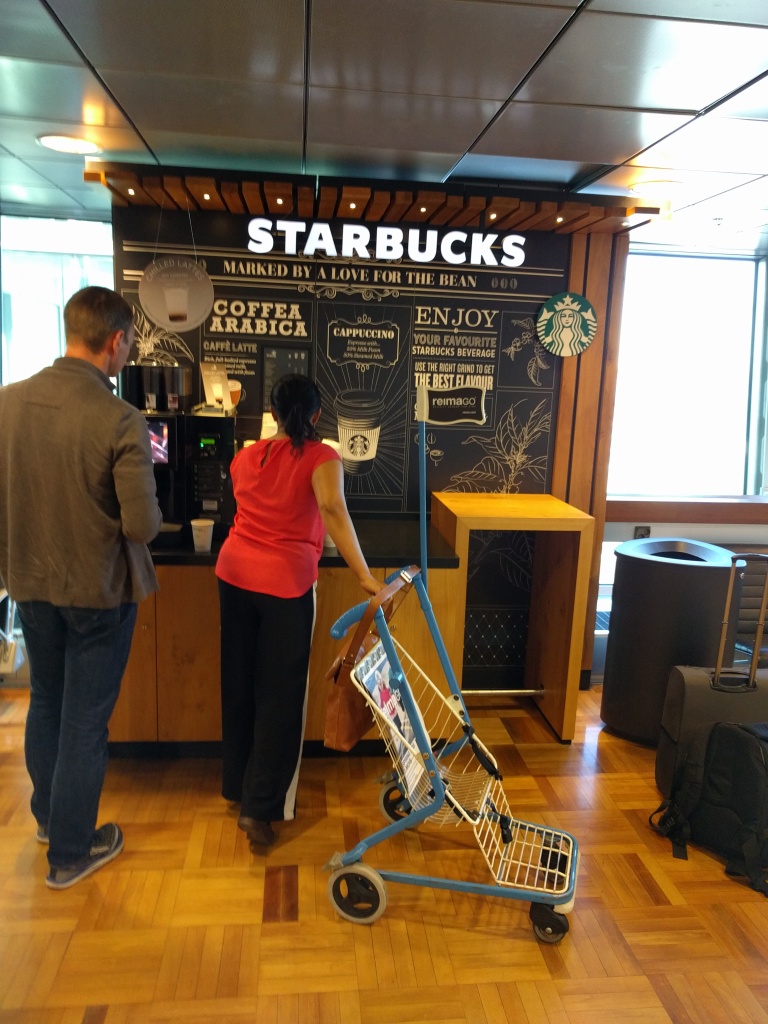 Norwegian Air strikes me as somewhat like Southwest Airlines. No frills, no drink service, six across seating. But at least they have assigned seats and they arrived on time.

Some travel days are better than others. While Norwegian started out fine with an on-time arrival, the scheduled 2 hour layover in Stockholm turned into 5.

Arlanda airport was busy. We used the SAS business lounge which is less crowded and has some refreshments. Some lounges are a lot better than others.

Ever find out that foreign currency you have is no longer valid? This happened when the Euro was created, though you could go to a bank and get the old national currency (like French Francs or German Deutsche marks and convert them to Euros. France at one point invalidated a larger denomination coin. Sweden invalidated their 100 and 500 Krona notes as of June 2017. Lucky me. I have a 500 Krona (~$62) note from 2016. You can mail it in for exchange, but they deduct a 100 ($12) Krona fee. Grrr. The bank responded to my email that there were no exceptions for tourists. Apparently this was done to wreak some havoc on money laundering, or maybe a step towards demonetizing their currency. It would be like the US invalidating the $50 bill and making you explain how you obtained them before giving you another, then charging you a Hamilton for the privilege.

Finally in Copenhagen, we took the Metro to within walking distance of our hotel. By the time we exited the airport, with all the delays, we got some firsthand experience with Copenhagen rush hour commuting in the Metro. Not as bad as London, but pretty cozy in the cars.

Cost of regular gasoline in Copenhagen from a nearby gas station (converted from liters to gallons and Danish Krona to USD)? Regular unleaded $6.23 /gallon. Diesel is $5.17/gallon. Looking at relative cost of living for typical things, Denmark is more for most things, but look at the relative cost to buy a fairly inexpensive auto; more than 2 times more! Make you feel better? Maybe not, but still interesting to compare. Do your own comparisons.