We arrived in Frankfurt at about 9am local, 2am US Central. When we initially boarded, we found that the airline had moved me forward and not moved my wife. Flight wasn’t completely full and though we left an hour late, the flight was on time into Frankfurt. We both got some sleep.

This will be a travel day. Being one of the main travel hubs in Germany , the tarmac is dominated by Lufthansa planes, some few American carriers and some others unfamiliar to us. That black Mercedes you see in the foreground is the limo to the plane if you are traveling 1st Class on Lufthansa. Needless to say, no car for us today.
The free WIfi gives my wife a chance to bid on some things on eBay. 😉

Were in the Lufthansa Business Lounge. By 11 am, they’ve brought out wurstchen und kartoffelsalat (weiners and potato salad, good German staples).

The Financial Times only has one small story about the apparent feud between Scaramucci and Priebus, on page 3. The lack of Trump circus news is a welcome break. But Twitter means you’re never far away….

Even though we were transiting though Frankfurt, we had to leave one terminal and take the train to another, which meant we had to go through security again. I was the lucky recipient of a very thorough pat down, as even with emptied pockets, I set off the metal scanner.

Wherever we can, we roll-on and off with suitcases rather than check them. Sometimes you have no choice. Last summer coming back from Iceland, we had to check our bags in Reykjavik. They appeared a couple of days after we returned home, though the airline really didn’t know where they were.

The service on Lufthansa was actually quite good. We had a real meal, with real cutlery (instead of plastic ware), on a 2.5 hour flight. Helsinki is +1 hour to CET or 8 hours ahead of US Central Time.

The airport was larger than I expected. We bought train tickets for transportation into the city center. It’s about a 30 minute ride in the train from the airport to Helsinki’s city center.

Thick forests surround both sides of the train as we leave the airport with tall pine and Aspen.

The train stops several times along the way at smaller stops. There are apartment buildings, but probably not higher 7-10 stories, small manufacturing buildings, shopping centers, even a Starbucks. McDonald’s is present too, with its ‘El Maco’ (Big Mac?)

While the landscape isn’t mountainous, there’s evidence of pink granite where construction is taking place, meaning it was formed through volcanic activity.

The hotel is about 5 minutes from the train station, if you know where you’re going. In a square outside of the station, there are tents set up and long lines for entrance into a beer fest. 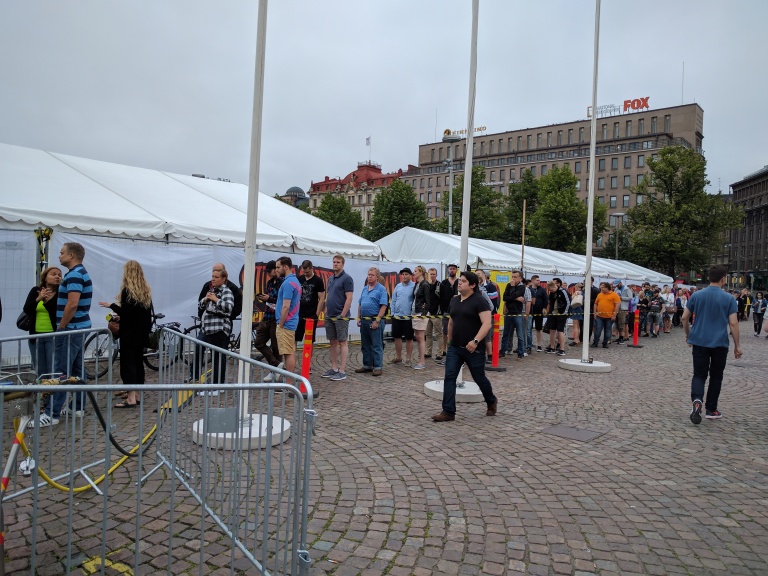 By 7pm local time, we’ve finally arrived at our hotel.