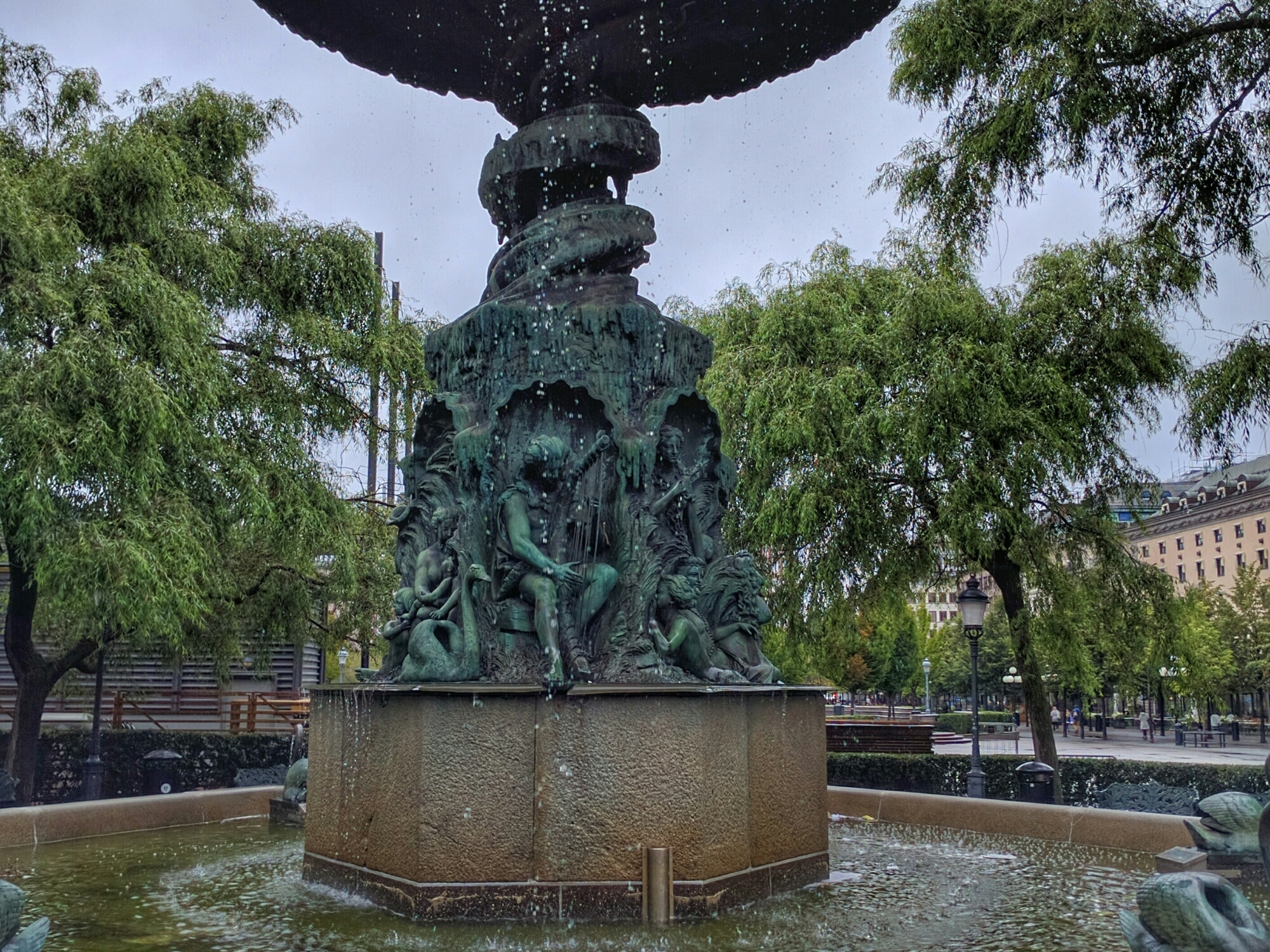 If it’s drizzly, you go inside, and go shopping of course. One more stop in the HWT (Hermès World Tour). 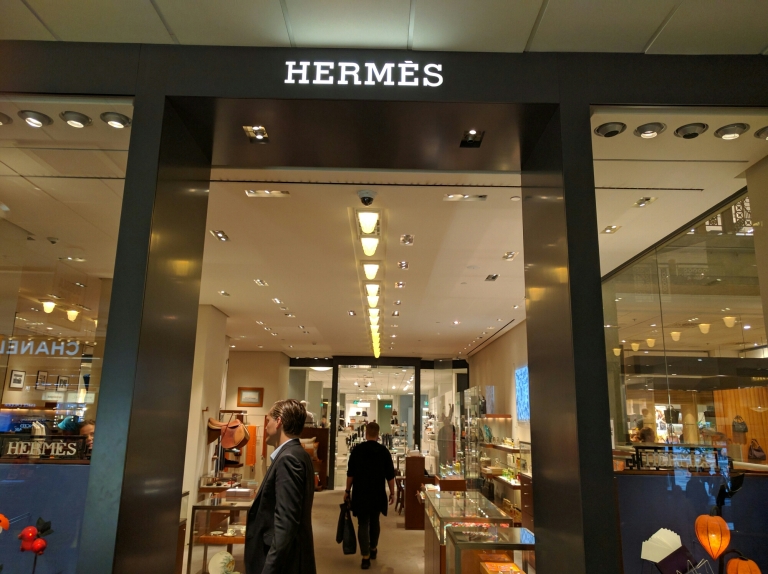 No contribution to the Swedish or French economies today.

Then on towards the Gamla Stan and the Nobel Museum, past this fountain 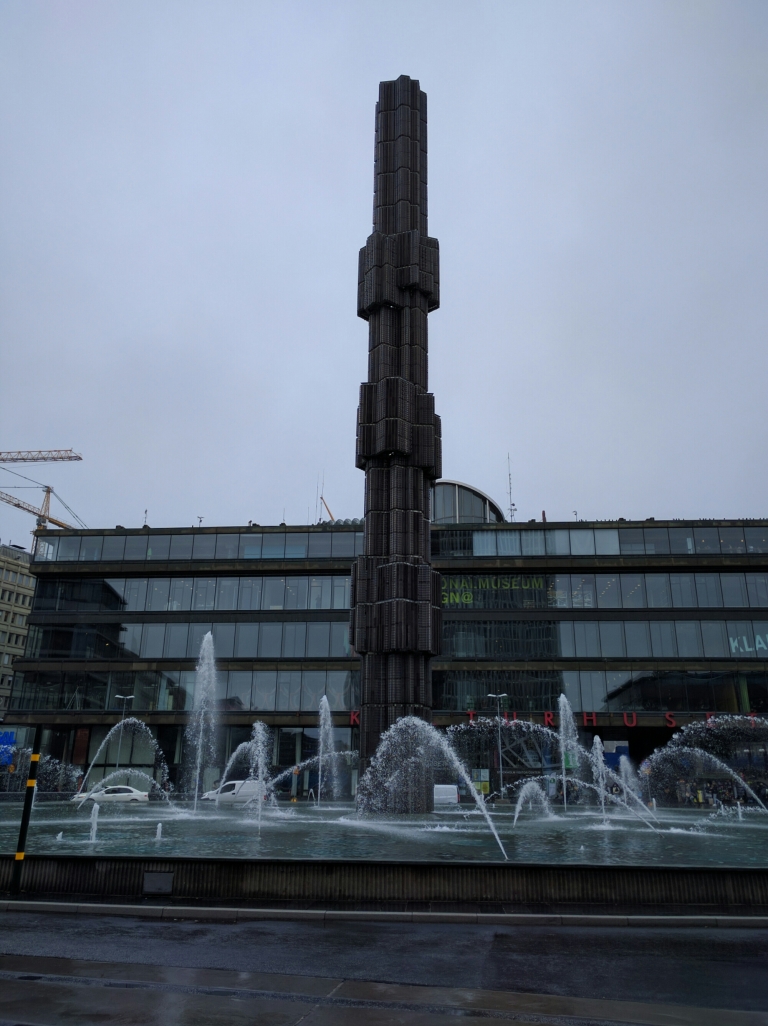 Nearby is the Opera and the Kungstragarden, which was really lovely. It rained this morning, so the flowers glistened with the rain. 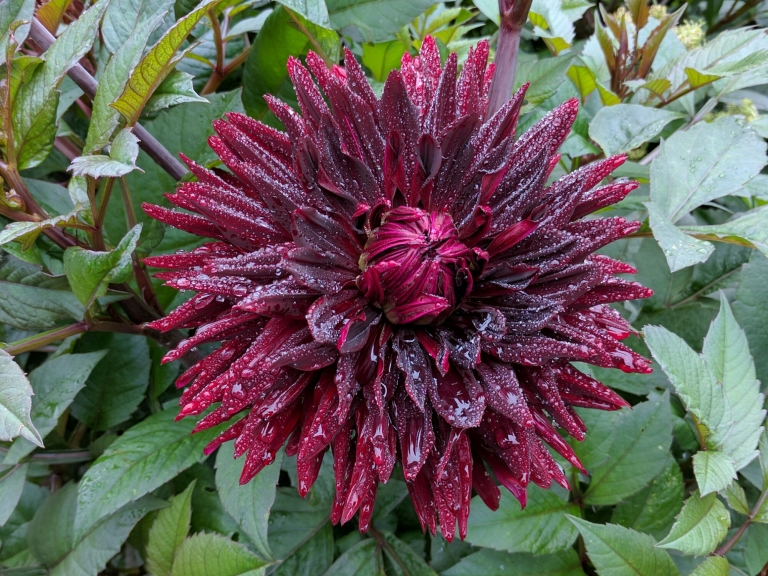 And the large fountain was the centerpiece

We walked back, over the bridge past the Palace, to the Nobel Museum, where we’re here for a tour. The attendant selling tickets asked   “Weren’t you here yesterday?”  We were, but just in the café. Amazing memory, or maybe I’m that memorable (yeah, right).

The tour and guide was interesting. I found the gallery of Science in Sketches to be fascinating. Each Laureate explains in a drawing (one page, one side) the concept for which  they got their prize. Some humorus, some simple (some yes, some, well, that’s why they got a medal). None of them will get medals for their drawing skills, but it’s an interesting challenge to ask them to distill their accomplishments into a one page, one side, drawing.

The museum is moving to a new venue in 2019. The architectural drawings look amazing.

The guide spoke at length about the process of selecting the winners for the Nobel prize. Although Nobel’s will indicated the prize in each of five categories (there are six “prizes’ though) should go to the individual whose contribution made the greatest contribution to humanity in the last year. In fact, except possibly for the  Peace prize, all of the winners’ accomplishments took decades to transform themselves from an idea or theory into some provable result. Examples include the theory about the Higgs-Boson particle. Even Einstein, who won the prize in 1921, didn’t win it for his theory of relativity (too controversial at the time). His theory of gravitational waves wasn’t proved until 2016, 100 years later.  Most prizes in science (chemistry, physics) and medicine are made to more than one (but no more than three) individuals. Awards can only be made to living persons.

Economics was not one of Alfred Nobel’s original five categories (literature, chemistry, physics, medicine, peace). It was added later and isn’t technically a Nobel prize as it has a slightly different name, but has the same status and prize money (though the Economics prize money is funded by the central bank, not the Nobel Foundation) and awarded at the same time–December 10th of each year, the date of Alfred Nobel’s death.

The selection process entails putting together a ‘short list’ from which the final candidate is chosen. The short list is published, 50 years after the date of the award, so there’s no Sturm und Drang ,or appeals, about who the winner is.  The award value varies in value based upon the economic returns of the Nobel Foundation’s income, but is about 8,000,000 Sek (~$942,000) and is shared among each category, if more than one individual in a category wins. Nobel’s net worth at his death in 1896 was ~$1.5 billion (no direct heirs); the fund’s endowment is now about $3 billion.

I asked the guide why Nobel contributed his entire wealth to this type of endeavor. He said there was no clue in Nobel’s will. Nobel lived in Paris for a number of years and at one point. Nobel’s brother died. The newspapers mistook his brother’s death for his own and the articles about him  and his contributions were negative.

There was a suggestion that maybe this affected his thoughts about his legacy. He was a chemist who developed dynamite and the required blasting caps. He was savy enough to be able to capitalize these inventions into immense wealth. All his businesses were sold and the proceeds funneled into the Nobel Foundation, providing the funding and mechanism for the last 120 years’ of recognition of those materially contributing to mankind.

We made our way back towards the hotel, along the waterway, to the Kungsträdgården. Just prior to getting there, we saw