In some sense, a passage is just what you’d think- a passageway between two streets or buildings. In London and Paris, while they certainly serve that purpose, they are shopping arcades, with small shops, restaurants, artist’s galleries. Think of them as an early form of a shopping center. In London, we visited the Burlington Arcade. We visited the Burlington Arcade in 2015.

We visited three Paris passages in the 2nd arrondissement.

The “plus grande” of the the first two was definitely le Passage du Grand Cerf. Just across the street from Passage Bourg-l’Abbe, the Passage du Grand Cerf, built in 1825, was full of shops and much better kept. There were a variety of shops from a yarn shop, soap shop, artists’ galleries, interior decoration shop with old (or apparently old) hardware, cafés. It’s multi level as well, with crosswalks over the central core. The photos will help you appreciate none of them are very wide.

The Passage Bourg- L’Abbe though it had seen grander days, was interesting for its decor. Built in 1828, there is a barometer at one end of the ceiling and a clock at the other and an arched glass roof. Age has contributed a certain patina to the interior; neglect even more. It was about half occupied with businesses.

After that, we took the Metro a short distance to visit Galerie Vivienne, also in the 2nd, near Paris’ Bourse (stock exchange). While it’s a big building, the Bourse probably doesn’t have any activity on the trading floor, with the migration of stock, option and commodity exchanges to electronic in 1998.

Galerie Vivienne
Built in 1823, it’s larger than either of the other two we visited and one wing was being renovated with a multi-level bar and café. The notable design aspects of Galerie Vivienne (if you read French) were it’s mosaic floors and glass ceilings. Apparently there are also apartments on the upper floor, as we saw a winding staircase and residential mailboxes behind an entry door. 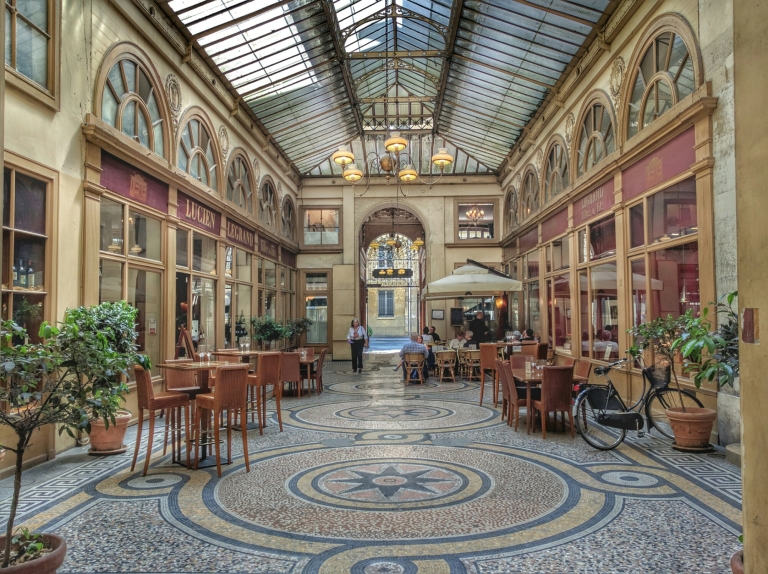 It is remarkable that these structures, as novel as they must have been at the time, have endured for ~190 years.

Jardin du Palais Royal
We visited the gardens and sculptures of the Palais Royal (originally Palais- Cardinal), near the Louvre.

Under the shaded walkways, there are benches if you wish to linger and a café.
With a deep history, today the Palais houses the Ministry of Culture. The striped columns in the courtyard were commissioned by Jack Lang, Minister of Culture. At the time, they caused some controversy, but have remained. Lang remains in politics, though no longer in that role.