Just a few blocks away from hotel is the Vyšehrad castle. It has steps up to the top that are taxing to old knees.

Will the hike up be worth it?

At the top, there is a commanding view of the Vltava river below and Prague Castle in the distance.
More about the castle .

The answer was yes, but before we went into the 11th century Basilica, we walked through the cemetery outside. It contains the grave (though we did not find it) of Antonin Dvorak. Oh, and the cemetery has an app on the Apple and Google Play stores.

It’s not a lot warmer inside the Basilica than it is outside, but it is really lovely. Every surface on the walls, ceiling and pillars are painted or decorated in some way. You can see it is not particularly large, but still in use.

From the Basilica, we took a tram down along the river near the Charles Bridge. The Charles Bridge is a pedestrian bridge over the Vltava river and it is lined with statuary (historic and religious) along each side. The bridge is teaming with people. I can only imagine in high tourist season it would be shoulder to shoulder. Along the bridge, artists are offering portraits, a few musicians and a few souvenir vendors, but not too much to detract from the sights.

Across the river up on the mountain is Prague Castle and an enormous monastery. We’ll visit Prague Castle tomorrow. Interesting history of the movement of the Royal seats of power between Vyšehrad and Prague Castle on Wikipedia. Look under the History subheading.

We continued across the river, knowing we’d need to reverse course later, as we want to visit the ‘old town’ , which is on the side of the river from which we came. Went in search of some coffee. I used the proximity of a McDonald’s to connect to their WiFi so I could use the Starbucks app to find a store. It wasn’t far away, fortunately, because we’ve been on the go for about six hours.

After resting up a bit and uploading some photos to Flickr, we made our way back over the bridge and into the old town. Here in a central square is the old town hall, several large churches (closed because it’s late). On the side of the square near the old town hall are some food stands selling something I think we’ll try tomorrow. Around the corner, opposite the old town hall, are a series of restaurants. On the other side of the square, there is a musician playing piano . Although I don’t understand the words, i recognize the melodies of some popular music. 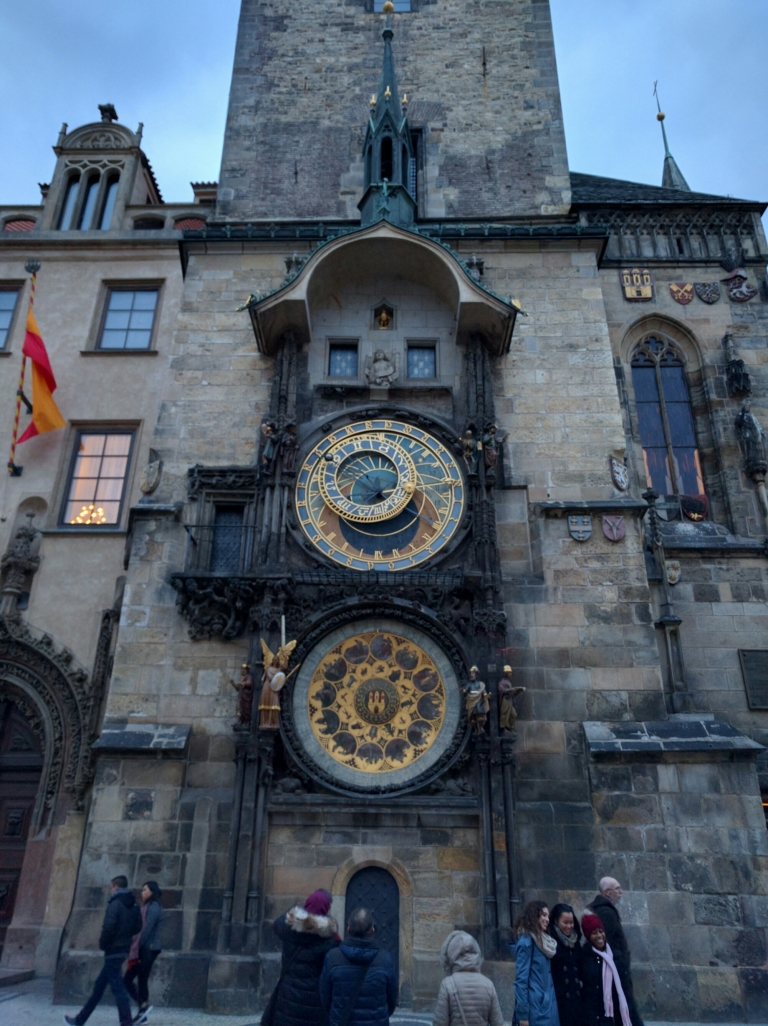 One of the streets that radiates out from the square is where the higher end retail is located, so, naturally, we walk down to make sure we check off another site on the HWT (Hermes World Tour). Fortunately, no orange bags of any size left the store with us.