I’ve enjoyed Amsterdam. Just about the time I got comfortable knowing where things were and how to get there, it’s time to leave. There’s a Thalys from Centraal Station about every hour before noon. From our hotel, we hopped onto the tram to get to Centraal Station, which is really quiet at 7 am. We will take the Thalys from Amsterdam to Bruxelles, then have about 45 minutes between trains before taking the Eurostar under the Channel to London’s St. Pancras station, from which all Eurostar trains arrive and depart. Your train ticket tells you which car and seat number you have, and the signage on the track tells you which section to be near for your car (so you don’t end up walking the length of the train when it arrives).

Seeing the weather forecast back home makes me glad we’re here, where the temperature is 64 degrees.

The Eurostar has its own terminal (as it does elsewhere), so after leaving the Thalys, we head for the Eurostar terminal. They have both Belgian passport control and UK passport control before going through baggage screening (same as for a plane). We are able to use the business /first class lounge thanks to an AMEX Platinum card, for a brief respite from the busy terminal. Unlike the terminal in London, you cannot board the train directly from the lounge, which was convenient.

Boarding is called and we soon depart. We’ve not traveled this segment before, so I’m unsure how long it will be until we get to the Chunnel. Outside the city, we really build up speed. Again, no speedometer, but we’re easily topping over 100 mph.

The journey took just over 2 hours, station to station, with about an hour to the English Channel, 25 minutes underneath, and the balance from the English coast to London.

-1 hr crossing the Channel.
St. Pancras is a very busy station. We’ll need to get from the rail station, down to the Tube station, check our Oyster card balance in the event we need to recharge. We still have ~8£ each on two of the cards and a negative balance on a third card (oops, we’ll fill it later), so we have enough without recharging, to get to our hotel.

You (normally) get charged based on the number of each color plate, with some plates 6£ and others as low as 2.50£. Those little plates can add up quickly! Lunch for the two of us was about 25£ ($39). Normal prices for our dishes would have been 35£ ($54). Not cheap, but less. Eating in London isn’t cheap (nothing in London is cheap) .

The room is ready and we get an upgrade, which means a sitting area in addition to the bed. We have a nice view of.. the roof across the street. Not high enough to see out to the Thames.

Time for a nap. Getting up at 6am while on vacation was expedient, but awfully early.
ZZZZ…..

Well, that was nice, wasn’t it?

Time for dinner at a nearby noodle bar. Neds Noodles on the South Bank is a great, reasonably priced choice. One box is definitely enough for the two of us. The banana fritters are really good, too.

The London Eye is still running, though with the clouds and approaching darkness, visibility must be limited. The day we went up a number of years ago was beautifully clear and we’ll worth the experience. The weather is still trying to decide whether or not to rain, and finally decided to let us walk about a bit without getting wet. 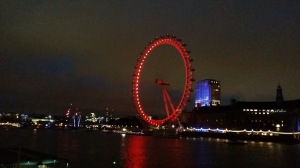 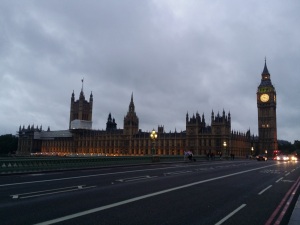 Lots of people on the Westminster bridge taking the same photos as me.