For the many years I worked remotely at home, my desk was overwhelmed with a docking station and monitors for my work computer. Now that I’ve been rid of that nuisance (i.e.’ retired’), I have the chance to set up my Mac the way I’ve wanted to before, but didn’t have the space.

In planning this, I thought I’d use the two existing monitors I had, plus a third on an adjacent desk that I was using thru an HDMI switch to connect to my Mac Mini (Plex server). I’d hoped I have three externals plus the laptop monitor.

What I found though, is that if you aren’t using thunderbolt monitors (who can afford multiples of those?), is that the Macbook Pro can only support two external monitors, unless it’s through Thunderbolt. Since I have both of my external connected through the digital to mini-dvi port (thunderbolt port), both of my existing Thunderbolt ports are in use. Without buying a Thunderbolt dock (as much as one of my monitors, though not as much as a Thunderbolt monitor), I cannot daisy chain another monitor. I have a usb to digital converter box, but I had some lag when I used it before on a Windows machine, so I’m not inclined to use it here.

To connect my monitors to the Mac, I ordered a couple of these cables from Monoprice. Hard to beat the price.

I have 20″ and 19″ Dell monitors. I don’t have enough desk space for bigger monitors if I wanted to buy them, right now. 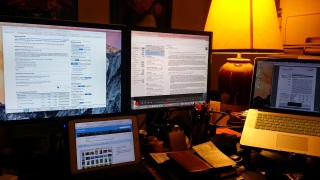 I found that when I tried connecting the third external monitor to my Mac’s HDMI port, one of the other two went black. So, while not exactly what I had in mind, having two externals is a huge improvement! I set up a remote screen sharing session to the Mini in one of my workspaces to work on that computer when necessary (I’m lazy, it’s three feet away). I’m enjoying the added workspace, but do occasionally find that I ‘lose’ the cursor in all that space, but I also got rid of the extra keyboard and mouse from the docking station.
Since I have two Macs (Macbook Pro and the Mini), but only want one keyboard, I bought a Logitech K811, which actually allows you to connect to up to three devices through Bluetooth. Simply press the function key at the top of the keyboard to switch between devices. Since I have the remote screen sharing to the Mac, I don’t need a second mouse for the Mini. That much less clutter on my limited space desktop.
I’m still considering whether to use Reflector to provide the ability to display my iPad (the smaller screen below the two displays) to display on one of the monitors, but I haven’t really found a personal use case for this as yet.