We decided to spend the day in the valley and hike down one of the roads leading out of the valley. Walking out of the village, you emerge into a wide valley with a river through its center and farms scattered across luxuriant sloped green fields. There are no crops besides hay to feed dairy cattle and sheep, unlike Bavaria where the rolling countryside has fields of corn. The steep mountainsides of the Swiss Alps rise up almost vertically on each side of the valley, the result of a collision between the African and Eurasian tectonic plates.

Over time this constant pressure from the colliding tectonic plates resulted in rocks being squeezed, folded, and thrust upward. The final result are spectacular, high standing mountains with bends and folds visible within the rocks. The whole process started about 55 million years ago. In some places the rock looks like it has been thrust nearly vertically, in others, folded or thrust at lesser degrees, then overlaid with a different layer of rock.

Since about 2.5 million years ago, the cyclic glacial periods have led to massive ice blocks carving out sharp mountain faces, and rounding valleys, like the classic glacial U-shaped valley of Lauterbrunnen (as opposed to river formed valleys which are more V-shaped).

Under the enormous weight, the ice masses of the glaciers, some of which were over 1,000 meters thick, moved on the slopes of the Jungfrau mountain range. The pressure from the weight of the ice heated the glacier bottom so that the ice begins to glide on the melting water. As the glaciers recede, they transport huge amounts of rubble – from small pebbles to huge boulders. This rubble acts like sandpaper, sculpting the lanscape.

Another example of the actions of glaciers sculpting the landscape was the Königsee National Park.

The slow “violence ” of the glaciers left a beautiful valley.

The farms alongside the road (little more than one tractor’s width wide) have already harvested their hay crop for the year. Aside from a tractor or a resident, the “traffic” comes from hikers going up and down the valley. To our left as we walk is the Lütschine river, not particularly high now as the snow melt has already taken place.

While the summer flowers may have peaked, some gardens still flourish.

One farmer who makes cheese has gone “hi-tech” with a cheese vending machine. 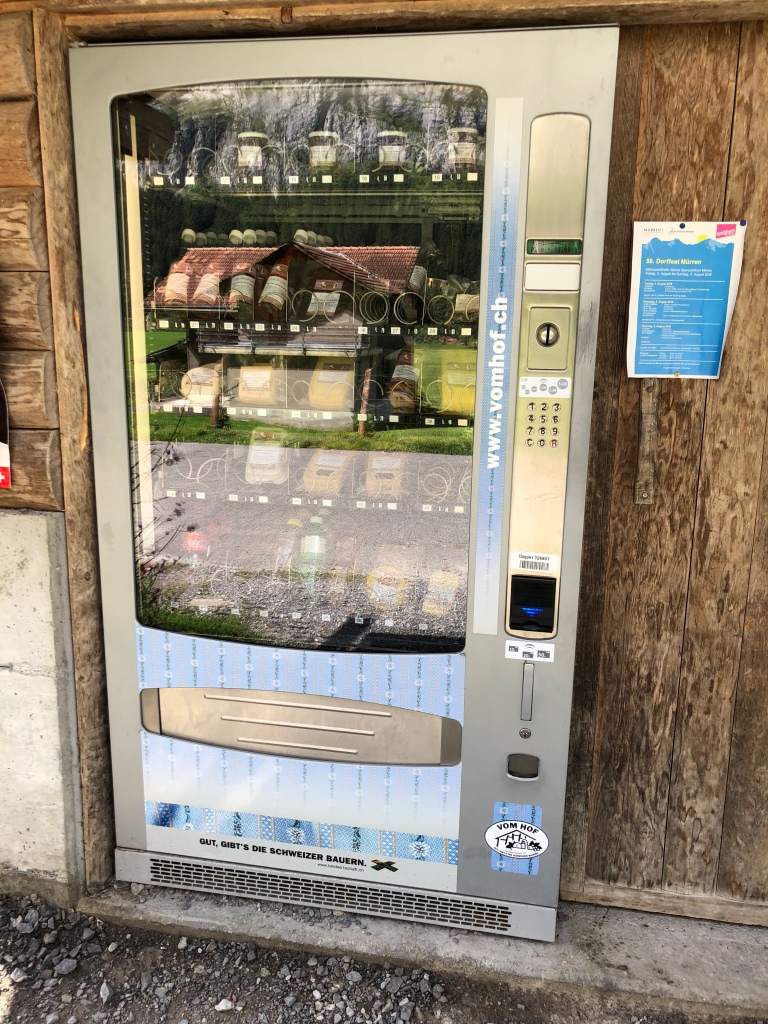 while another nearby is more traditional 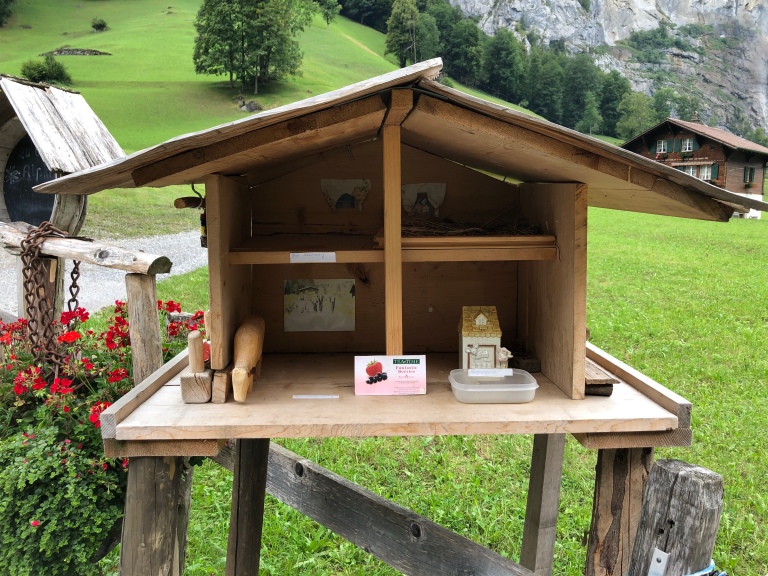 Some years ago we went on a tour at the other end of the valley of one farmer’s cheese making operation, which was a sideline to his dairy operations. In the Co-Op you’ll see locally sourced cheese packaged as such.

Were you to walk along the other (larger) road out of the valley, you would encounter the Post Bus, which connects small villages in the valley.

We’ve taken the Post Bus once when we went up the Murren side of the valley and then took the train to Stechelberg where we took the bus to Trummelbach Falls, then back to Lauterbrunnen.

Where there are waterfalls coming down the mountain face, the water runs off in small streams. Remember, there are about 72 waterfalls in the valley, a number and size which surely varies with the snow. Some of the falls are relatively large, like Staubbach Falls (visible from our B&B room window), while others are small.

The steep mountain walls make for good departure points for base jumpers and hang gliders. We saw four or five hang gliders when we started out and a base jumper landed not too far from us, though sadly, I was not able to get a photo. There are several services here that advertise paragliding, but I’ve decided that jumping off the side of a mountain is not for me.

We pass by a camping ground just outside of the village that has cabins, spots for RVs, and pitching a tent if that’s your style. There are quite a few campers here now. We took advantage of their restaurant

It is getting late in the afternoon and that typically brings a chance of a shower, so after our beer, we’re headed back into town.