Central Paris on a Saturday is an order of magnitude quieter than weekdays. There’s still traffic of course, but some of the smaller stores are closed and it just feels less crowded.

In a prior visit to Paris, we took in the sights of some “passages” , shopping arcades of the 19th century version of a mall (with some style). Today, we’ll visit three more.

It’s fortunate that these structures survived wars, depressions, and modern retailing to provide a glimpse into the past.

We visited three, which conveniently (for us) stretched consecutively, each separated by a street from the other. There’s a lot of similarity in their design and structure since they were built in the same period, but designed by different architects. Some common features are:

There was good customer traffic in most of the passages, but realize the size of the individual shops is quite small by today’s standard. 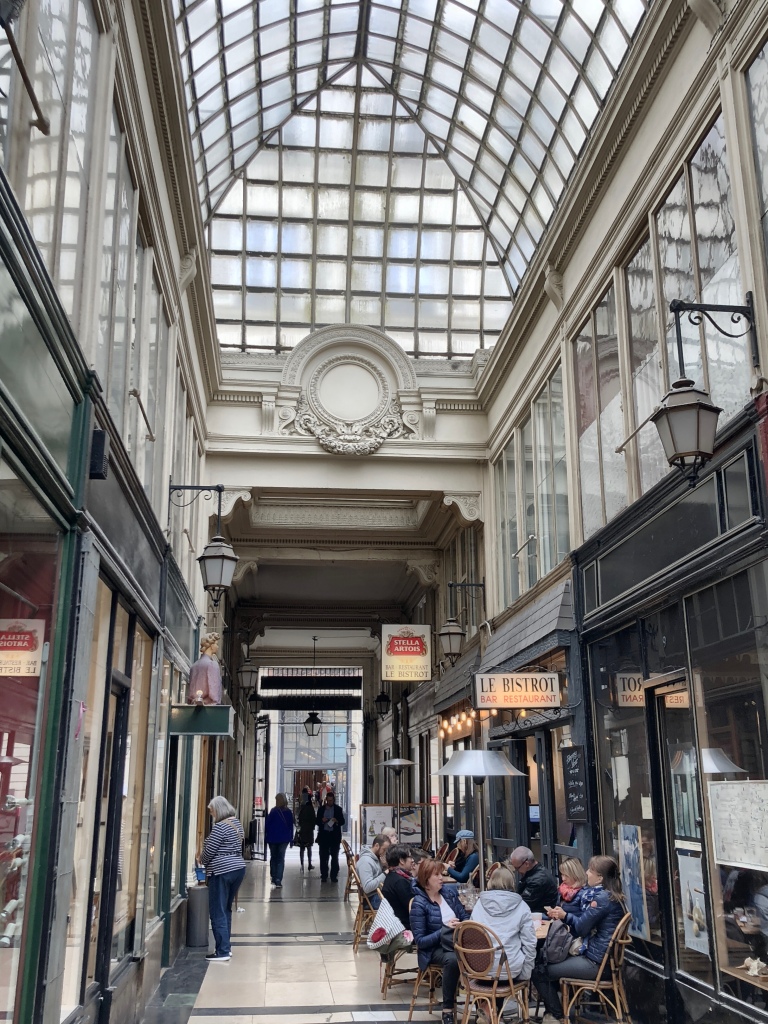 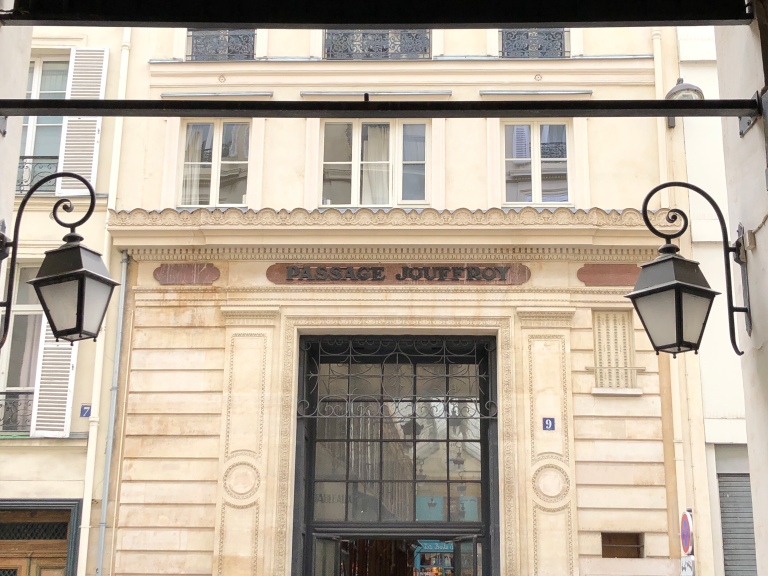 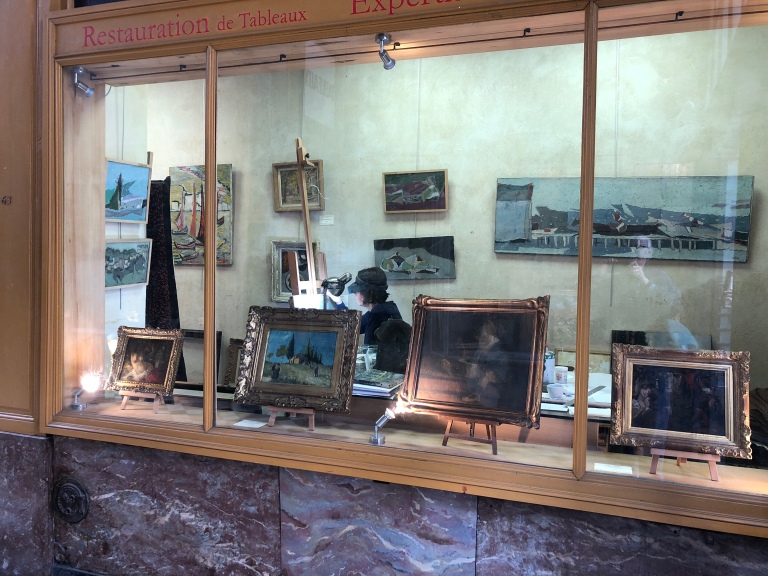 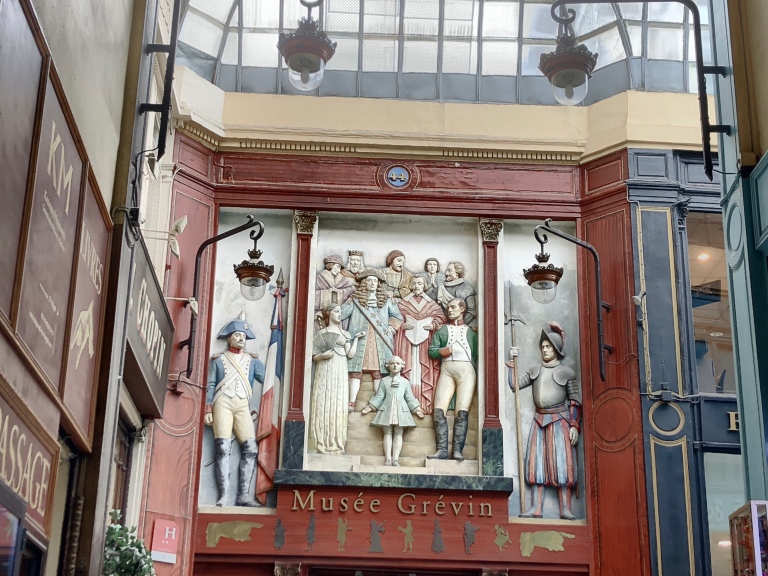 Passage Panoramas (1800) is the oldest of the covered passages of Paris, located in the 2nd arrondissement. It is one of the earliest venues of the Parisian philatelic trade, and it was one of the first covered commercial passageways in Europe. 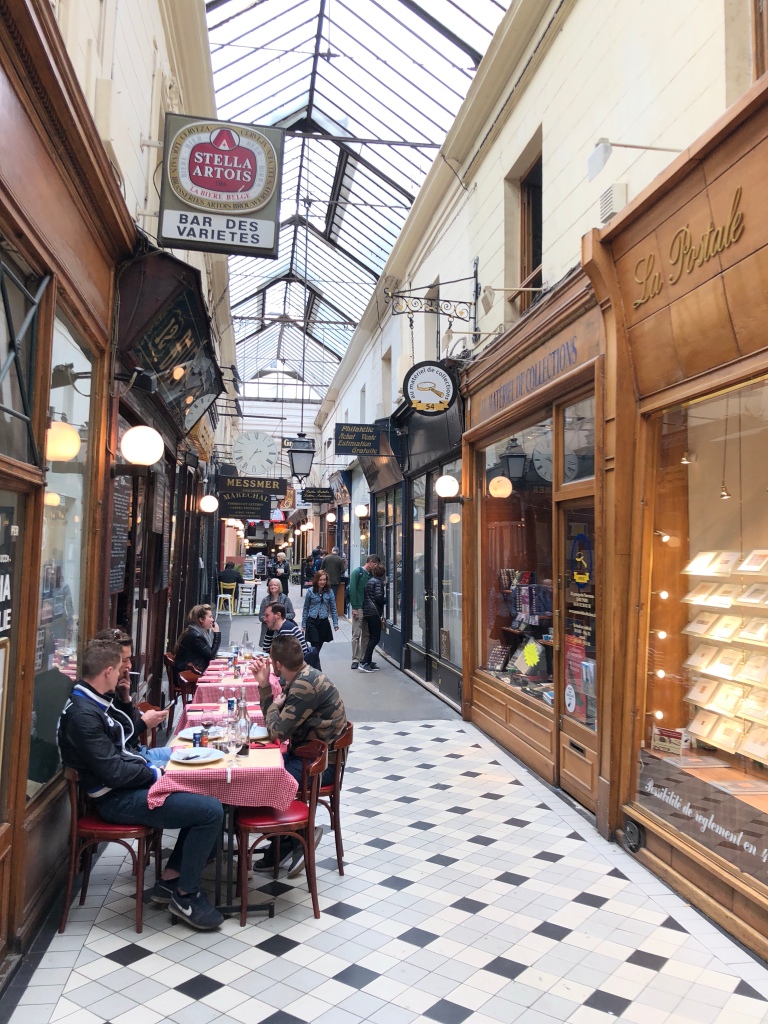 From the passages, we made our way over to the area of Saint-Germain-des-Prés.

The church of the former Abbey of Saint-Germain-des-Prés is located close to the exit from the Metro. We’ve been through the church a number of times so we did not explore it today, but it is worth reading about the history of the church and the area 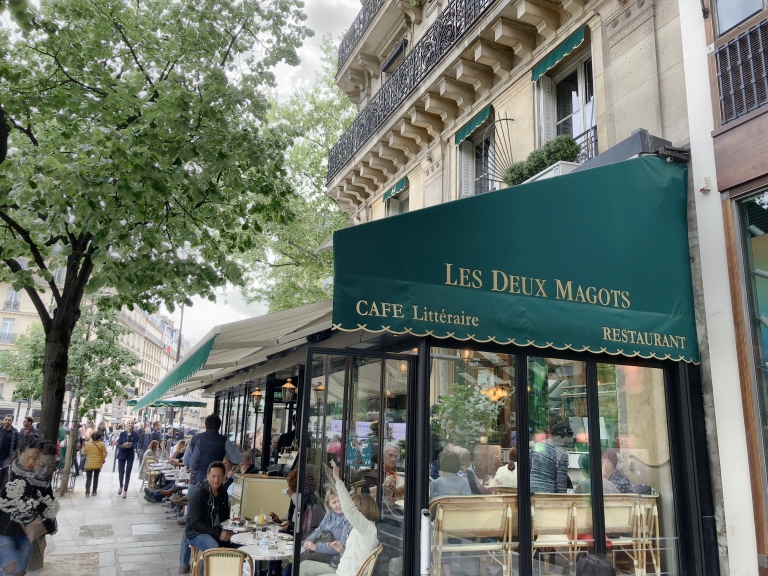 Famous for its history with intellectuals who would gather here or at nearby Café de Flore, today, those intellectuals and artists might not want to pay $8.50 for a coke, nor did I.

There has been a jazz band located on the corner of the church of Saint-Germain-des-Prés each of the last few times we’ve been here. They play and they hope to sell you their CD. 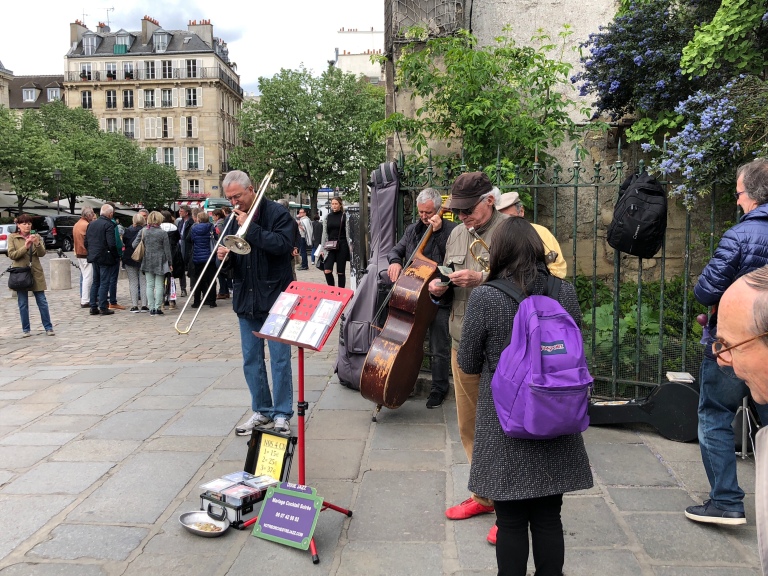 A bit of nearby insanity was taking place at CityPharma. A few blocks away from Magots, it was mobbed by bargain-seeking Parisians and at least two American tourists. Pharmacies in France are different than in the US. While we might commonly say we’re running to the pharmacy to get a few things like toilet paper, some Gatorade and maybe some gum. But you wouldn’t find any of these in a France pharmacy, which are smaller than U.S. chain drug stores and carry just medicines and personal products. There’s no greeting card section or kids’ toys or candy, wine or beer.

This pharmacy is noted for its low prices for personal care products, as compared to a Sephora or a large department store and the two floors jammed with people looking for bargains was not the result of a sale. 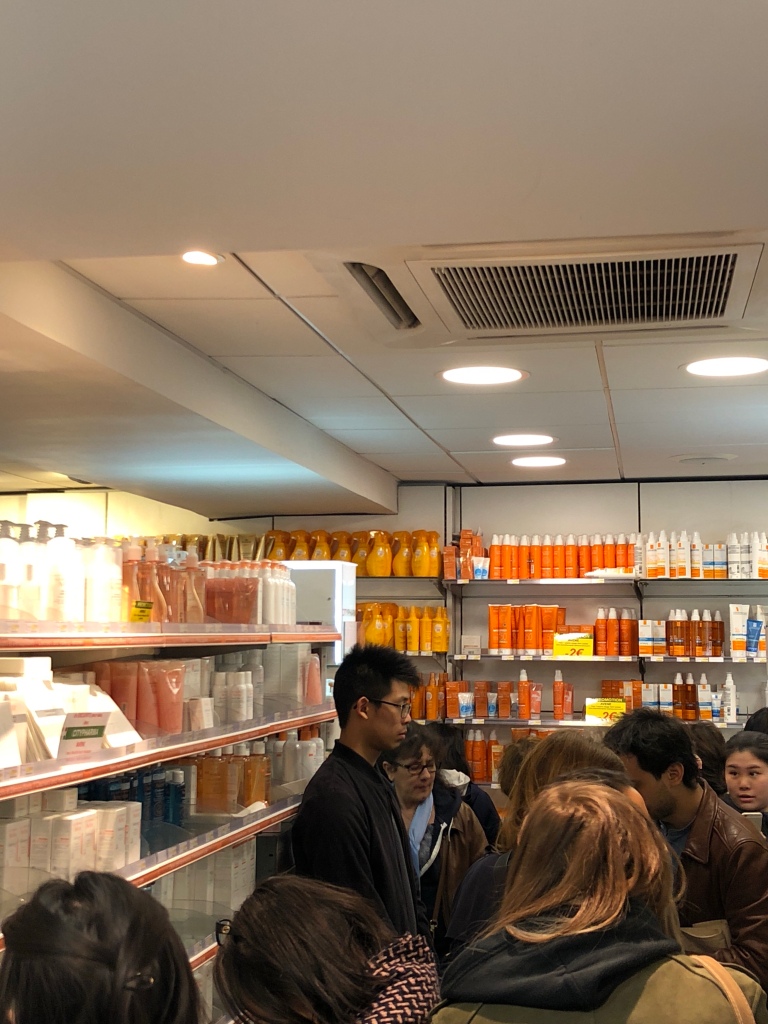 We had not ventured up the Champs Elysee, famous for the Axis it forms in Paris, where on a good day, you can stand with the Louvre on one end and see the Grand Arche de la Defense (office building) on the other, with the Arc de Triumph in between. On a Saturday, the wide sidewalks are massively crowded. The Champs Elysee is lined with shops, restaurants. You’ll see a few American names (Five Guys has come to Paris), but mostly French. There’s a showroom by Renault (French car manufacturer) with a full sized Formula I race car built of LEGO.

I understand that Apple is planning a store on the Champs Elysee, so we’re going to look for it as we “flaner” (stroll). Apple already have a store in the underground shopping center called Louvre Carousel (near the Louvre) and another near the Garnier Opera, but having a location on Champs Elysee would be a jewel of a location. The building where I understand it is to be located is on the corner, across the street from the huge Louis Vuitton store at Champs Elysee and Ave. George’s V, but the whole building is under renovation and there’s no visible evidence that Apple magic dust is being turned into a 56,000 sq ft store. Next time.

The “Louis line” is in place as we approach the Louis Vuitton store. You’ll notice a couple of red exotic sports cars parked in front. These do not belong to customers. There are some enterprising fellows who rent rides in them. The street corner varies, but usually in this general area. You get to drive, but not by yourself; they want their car back.

What started out as a pleasant afternoon is getting a bit cool. We’ll cross the street and grab a snack before catching the Metro.

I’m not the only one standing in the median taking photos.

Yesterday we visited Galleries Lafayette, an enormous department store. It and Au Printemps are the two dominant department stores. Galleries is located near the Opera Garnier. On one corner stands a six story building dedicated to menswear. Across the street is a building dedicated to women’s wear, household goods. On a third corner, two floors constitute their food hall (first time for us visiting the food halls). We went Friday thinking it had to be less crowded than it would be on Saturday. But it was really crowded. Inside the store are departments from virtually any premium name brand fashion or jewelry retailer. I don’t know the economics of the arrangements, but imagine each brand is a (manufacturer’s) store within the store.

The store’s glass dome is beautiful.

There’s just more “more” of everything than you can imagine. And if you thought you could avoid the “Louis line” by visiting the Louis boutique inside vs the Champs Elysee store? Wrong.

The only Louis Vuitton store we saw that didn’t have a line out the door is the store on Place Vendôme that only sells jewelry.