We arrived in Reykjavik, Iceland on August 22nd, after flying thru Minneapolis, then on to Reykjavik. I rather hope that there’s a lot of English spoken here, as I do not speak Icelandic  (íslensku) and Google Translate only goes so far.

We booked the hotel we are using on a speculative basis last year to take advantage of an expiring change in their loyalty program, not knowing if we’d actually make the trip. The airline travel arrangements weren’t completed until just recently. Unfortunately, we used Delta Airlines to get here and they cancelled the originating flight (connection in Minneapolis), so we’re going to lose a day. Delta is so screwed up in their customer service, much less flight operations.

Some geeky stuff first. T-Mobile offers its customers an hour free Wi-Fi with GoGo. So I decided to “take advantage” to see what it can or cannot do. More than I expected at 30,000′ with satellite internet. None of this text or email stuff. We’ll put it to a better test, though maybe not what T-Mobile or GoGo intended. I’m a big Plex fan, so I decided I’d try to stream music from my Plex server (we’re probably over Greenland as I write this), my little Plex media server is a long ways away in North Texas. Music streamed ok. I remotely connected to one of my home computers and moved some files around, so that was amazing. Updating the draft of this blog worked fine as well.  I didn’t expect streaming a TV show would work since it takes so much more bandwidth, but I watched a bit of Big Bang Theory from my Plex server. So that Plex worked is either a testament to Plex or to GoGo, or both! Being able to remotely connect to one of my PCs and actually do something was also amazing. Oh, and I accomplished this using my cellphone.

The partial transatlantic flight (6 hours from Minneapolis to Reykjavik) was fairly typical, but not a wide-body plane, with three seats on each side of the aisle and the plane is full. One younger person got on with an enormous skateboard, which got taken off to be gate checked. The plane’s interior has a blue lighting scheme, which might be restful, but casts an odd color on the food. Blue food.🤔

Iceland has seen a surge in tourism since 2010. Something I didn’t realize is how small the country’s population is. 350,000. So big tourism means big changes. https://goo.gl/TmL3FJ Annual tourists totalled 5x the number of residents (of the entire island).

Scouting out some things in advance, gasoline prices here are somewhat higher– it’s an island with glaciers and volcanoes- no oil &gas! Most everything has to be imported. So based on what I found online, gasoline I expect to be about $6.40/gal. (199 IKR/liter) -we have a car. Food is also supposed to be pretty expensive. More on that as we figure out things. One critical phrase “Hvað kostar þetta!?” (how much is this!?).

The drive in from the airport to city centre (~50km) was pretty straightforward. The landscape driving in was purely volcanic, flat to low rolling hills of dark brown volcanic rock, boulders covered by a light green lichen. There are some grasses, but out here, no trees. I suspect there’s not much soil, just rock. In the distance ahead are mountains or volcanoes, though fortunately none are active now. The ocean is less than a mile off the four lane straight road leading into town. Incredibly, as we got into the outskirts of Reykjavik, they’ve managed to carve a golf course in between the boulders. Wonder if you get a penalty stroke if you bounce off a boulder.

Our hotel is down near the Harpa Congress Hall /Convention Center. All of the parking in town on the street is pay & display- buy your parking ticket from a machine based on the amount of time you want, then display the ticket inside your windshield. Different zones cost more or less, depending on how close you are to the center of town.

One benefit of being in a small country is that the cell phone data speeds are nothing short of blistering.

Though Reykjavik is the capital city and largest population center, it doesn’t feel big. Later on as we walked back through an older part of town, it really felt like a village. There are some tall commercial buildings, for sure, but doubt if there is anything over 20 stories, and most less than that.

We moved our car to a garage and then set about exploring the surrounding area on foot.

Their Harpa convention center sits on the harbor, just up from the Viking sculpture.

From the Viking ship sculpture, we walked up hill to see a prominent church, the Hallgrímskirkja, a Lutheran parish church in Reykjavík, Iceland. At 73 metres, it is the largest church in Iceland and the sixth tallest architectural structure in Iceland.

Standing in front of the church is a monument to Lief Eiricsson, from the citizens of the US commemorating the 1,000th year (in 1930) anniversary of his discovery of Vineland (North America). And you thought Christopher Columbus discovered Americas. Lief did so 500 years before Columbus. You may have seen or heard of the reenactment of sailing a Viking ship to North America to prove it can be done. The Draken Harald completed its journey just this year.

Iceland (Ísland) itself was discovered by the Vikings  in 860. The name (Island) came as the result of the harsh winter the Viking spent there.  Reykjavik was settled in 870. It came under formal Norwegian rule in 1262, then Danish rule in 1397. Rising nationalism forced Denmark to cede legislative power to it in 1874. World War II  and the end of the Nazis’ hold over Denmark saw Independence finally come to Iceland in 1944.

Having some knowledge of German, I can see some German/English cognates in some signs, while others are clearly rooted in Norwegian, Danish or simply the native Icelandic.

We spent our arrival day in town, but expect to be out in the island tomorrow. Driving in Iceland does have its differences to the US.

Like sand and ash storms, narrow bridges (1 lane wide, two way traffic). An adventure to which to look forward, like driving in Ireland.

I’ll leave you with a photo of our elegant meal. An Icelandic dog. 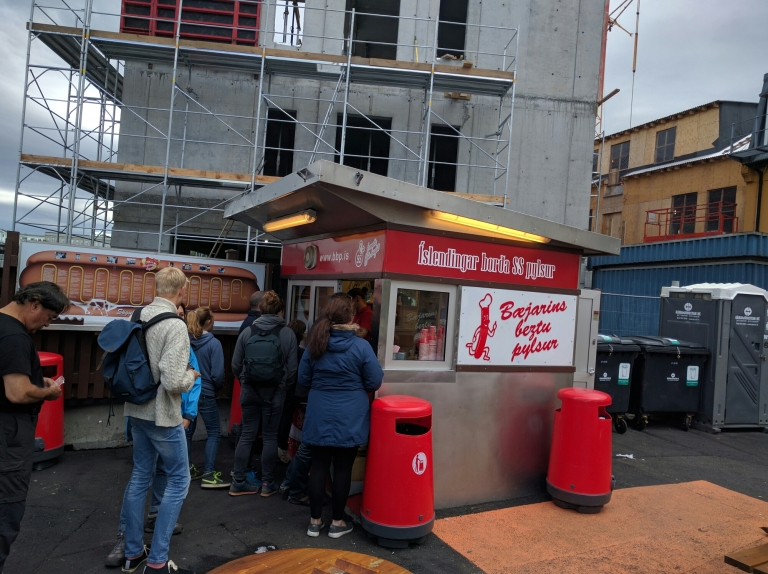