We have an early morning today, as we leave Prague by train for Salzburg, changing trains at Linz, then in Salzburg take a bus from the train station to the airport, pick up a car for the short drive to Berchtesgaden. But first, have to take the tram to the Prague rail station. From Prague to Sàlzburg is about a five hour train. The train today from Prague to Sàlzburg was all of $57 for two.

Understandably, at 6:30 am on a Sunday morning, we were the first ones in the hotel dining room for breakfast!

Tram #3 takes us to within a few blocks of the train station. From the ticket machine opposite the tram line, the tram tickets (a 30 minute ticket) cost 24 koruna each (about $1).

Funny, I never associated Communism with a cuddly bear (holding a Kalashnikov)

It’s a large train station, though I don’t know if Prague has more than one. On Sunday morning at 8am, it is not yet busy. There are quite a number of shops in the station, including some with which we would be familiar (Burger King, Sephora, Brioche Doree).

My wife recalls being in Prague with her high school chorale group. In that time, Prague was still under Communist rule. Their ‘minders’ decided that in spite of the prearranged concert, they weren’t going to be allowed to appear. She has fond memories of the city’s sights, but regrets they weren’t able to perform there.

The big announcement board with the train and track listings doesn’t update with a track until 10 minutes before the train’s arrival. We do not have much of a wait on the platform before the regional train rolls up. A little different here than in Germany, where though they too have a big announcement board, there are yellow placards in the station that show the time, train number, platform number and the train car arrangement for all arrivals and departures. With all those trains arriving and departing, they have to know in advance where each needs to be, or it would be chaos. The cars are numbered and are in a prearranged order. You are best positioned if you know in what section on the platform the car you need to be on will be.

You do need to make sure you are in the car number that is going to the city you want, as (except for non-stop trains), you might not end up where you planned if the car gets swapped out with another engine at an intermediate stop. If you make a seat reservation, this isn’t a problem, as it defines which car and seat for the destination city. We’re off exactly on time, 9 minutes after the train’s arrival.

Dobrý- by Praha! (Thanks to Google Translate)

The conductors now have small handheld computers with which to scan the barcode on your ticket, whether printed, or on your phone. I don’t see that they have WiFi on the train, so I’m unsure how it validated your ticket. Unusually, they also want to see the credit card you used to buy the ticket. Which credit card!?

Less than 30 minutes from leaving, we’re in the country side, small villages, farms out in the distance, surrounded by the forests on the hills around them; stands of birch trees, pine, deciduous and evergreens. Only a dappling of snow here and there remains. In some places, the forest is so dense you cannot see into it.

Benesov u Prahy is our first stop, then Olbramovice, Tabor, Sobeslav, Veseli, then Ceske Budejovice. As we pass through small towns, you see houses with their ‘allotments’ -small plots of land where they garden, and usually have a small shed or house. Every little allotment fenced off.

We pass entire fields of solar panels. The cloudy day today would seem to limit the amount generated, but saw similar sized fields of solar arrays when we came from Munich to Prague.

Something my wife observed that is different here in the Czech countryside is that we haven’t noticed churches in the small villages we pass through. This is a very common sight in France, Germany, Austria. Switzerland, where the church is the center of the village. Haven’t seen nearly as much of that here.
In some of the (very) small towns we pass through, the (train) Station Master is out standing in front of their station as we pass by, identified by their red hat; somewhat of an anachronism I would think.

In addition to farming, there seems to be a reasonable amount of foresting. We stopped for a moment where a timber yard lay by side of the tracks. And we also see reforestation planting. 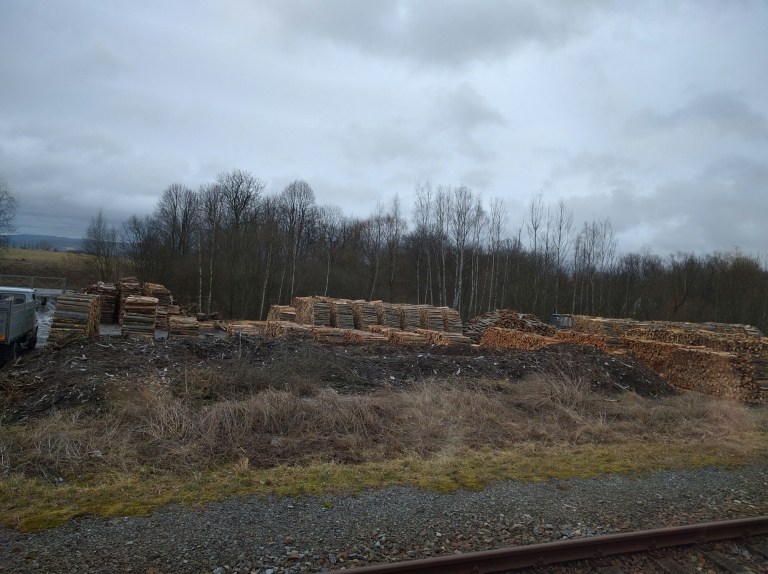 Though too early for Spring, I do see some smaller redbud trees that appear to have buds awaiting time to bloom.

In Sumerau, we’ve now passed into Austria, having just received my ‘Welcome to Austria’ text message from my cellphone provider. Now the signage is more mostly understandable. Though the landscape hasn’t changed, the buildings seem better kept, tidier.

Arrival in Linz , punctual! 8 minutes to disembark, find the next train, find the car and your seats. With tight connections like these, you have to be ready with your luggage to get off as soon as the train stops. Though it’s not far we find, it meant carrying suitcases and hand luggage down a long flight of stairs, then down two platforms and back up. The train arrives a few minutes afterwards. We were actually sitting down by the time the train left! This train lost no time in getting up to speed. Next stop Salzburg. I can see the Austrian Alps in the distance. 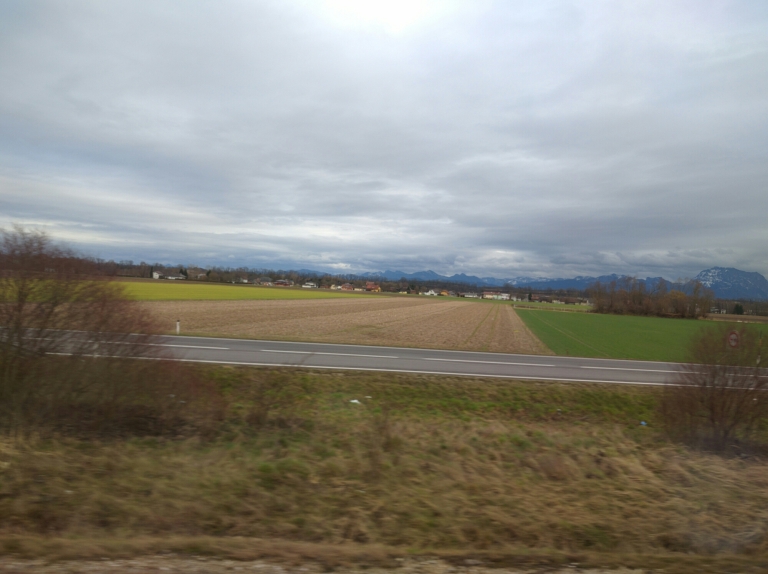 You’ll have to zoom in, but the Alps are there. 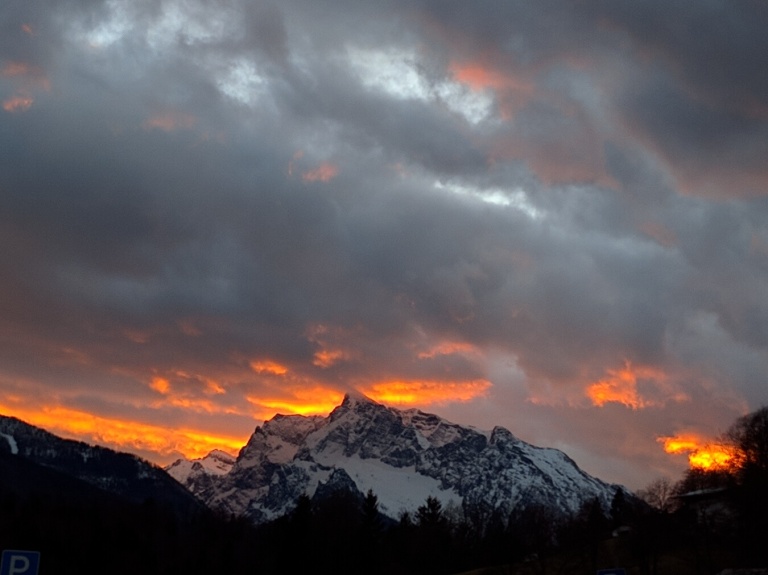 And the waterfall across from our hotel

Late afternoon, so we will check in to the hotel and go in search of food, as we’ve been traveling since 9:30 am and its now 6pm.