Recently, I stayed at a Hyatt that uses NFC, rather than the more widespread magnetic swipe cards, for room access. Upon checking out, I decided to appropriate one of them to do a little experimentation with NFC.

I use NFC a bit for Google Wallet, but not so much since they closed down Serv. Serv was great while it lasted ; I made some nice money on the program, where they paid me for using tap to pay. So aside from tap to pay, what else can you do with NFC? A lot, it turns out, but it still remains to be seen whether it’s worth the time.

I have a Samsung Note 3. I tried a couple of NFC programs from the Play Store, before tentatively settling on NFC ReTag. I decided on this program because it allows me to create the mini programs without necessarily writing to the cards. It stores the card’s id in a database on my phone, then activates it when I touch the phone to the card, even without the app running. The NFC chip in the phone reads the tag’s ID, which reads the commands on the first “cycle”. My first set of instructions has the Bluetooth being turned on, Wi-Fi turned off, starts the Plex mobile app (if it’s not running).

This might be the profile I’d use in the car, for example. Tap again, and the settings are reversed in the 2nd cycle (like if I come back home). 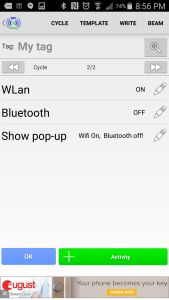 I’d need to leave the card in the car. The advantage to the program is that I don’t have to write to the card . Actions specified are based on the ID of the NFC card that was written into the program’s database.

I discovered that there are multiple types of NFC tags, each with different compatibilities and amounts of storage. They don’t really need much storage capacity , as the commands are simple text and wouldn’t seem to take much space. I ordered a small batch of NFC tags from Amazon

The card type I ordered is supposed to have enough capacity to contain a virtual business card!

There are options within each section to set the specific SSID to which to connect, put Bluetooth into discoverability mode for specific periods, put the phone into Airplane mode, set the alarm, brightness, start an app, etc. 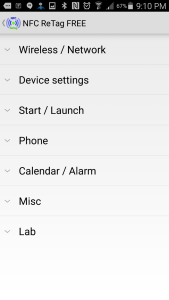 Interestingly, you can also use things like specific SSIDs as triggers to take other actions. This allows you to take actions based on the environment. It’s also possible to add Bluetooth and Power/Boot triggers.

To be practical, I think you’d need to program and place with the tags where you want your phone to take some actions or enter a specified state (and remember to use them). The tag order is a cheap experiment. I’ll spend some time thinking about “what and where”. But this feature on Android (no iPhone for now) allows you customize your environment..

I’ll be looking for ideas and applications I hadn’t even thought about. Hope to have some lined up by the time my tags come this week from Amazon.