2015 – 7 – 20
Prior to spending part of the day on the left bank, visiting the St Germain de Près Abbey , we tried out one of the many competitors to Laduree’s macarons, Pierre Hermè. There are several locations in Paris, and we found one near us. While he was at Laduree for a short time before starting his own business, he trained with several well known establishments in Paris. The macaroons have some unique flavors, but we did not find they tasted better than Laduree, but were slightly more expensive (2.20€ for a small one). Other well known bakers displaying macaroons are Le Nôtre and Eric Kayser, but they are very common (but like anything, not all equally good) .

Pierre Hermè
Taking pictures in the shop is a ‘No-No’

Prior to taking the Metro over to the Left Bank, we visited the showroom of Lalique on rue Royale , a decorative crystal manufacturer with a long history in France, dating back to its founder, René Lalique. We once had the chance to meet Marie Claude Lalique, granddaughter of the founder, and last of the family to work in the firm. She passed away in 2003 and the firm has been sold. Though they still produce many of the same pieces we collected, we don’t find the creativity and designs to be what they once were.

We took the Metro over to St Germain de Près to visit the Abbey. 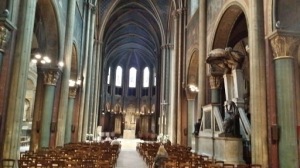 There are a several famous cafes located within a few blocks of the Abbey, where famous writers, artistes and philosophers once congregated. Les Deux Magots, Cafe de Flor. The name ‘Magots’ doesn’t mean what you think it might ; “Magot” literally means, “stocky figurine from the Far East.” and has to do with the history of the origins of the shop.

From the Abbey, we walked though the Left Bank looking for a shop that had since disappeared, and ended up on the banks of the Seine at Pont Neuf, where we could see that, overnight, the right bank of the area along the river had been transformed into a beach! For those Parisians who cannot take a holiday to the beach, the city brings it to them. There are three segments along the river where this takes place each year.

We had dinner at a cafe in one of our favorite areas of the Left Bank, rue Cler, at Cafe du Marché. rue Cler is known as a market Street, where each stall/store specializes in one type of product, whether it is fruit, vegetables, seafood, cheese, etc. Each sells only that type of product. There is a grocery store around the corner, but where’s the charm in that? 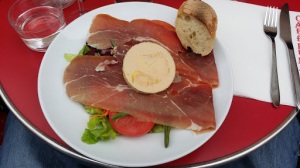 Desert! Crêpe with Nutella and banana