After breakfast at the local Paul bakery, we took a short Tube ride out to Notting Hill , nearby Kensington Gardens

We’ve visited a Paul bakery in France many times and it was nice to see them nearby. Yummy pastries and sandwiches and a nice enough day to sit outside.

It’s been quite some time since we’ve been to Kensington Gardens and in addition to the exhibit about Queen Victoria, we also planned to visit the King and Queen State Apartments, which we’d never visited.

It’s still early spring here, so some flowers are blooming, but except for cherry trees, most trees are just starting to bud.

Kensington Gardens are a part of a series of parks in central London and adjoin Hyde Park and St. James Park. The Palace is now home to a number of the Royal family, including Prince Harry and his fiancée, Meghan Markle (marriage about a month from now). Harry wasn’t around to greet everyone, so we visited the sunken gardens which are to the right front side of the Palace.

The sunken gardens were in full bloom, with a central water pond that has two fountains, surrounded by an arbor. The arbor was not yet in bloom, but I’m sure it’s even more beautiful when the branches covering the walkway around the gardens are leafed out. 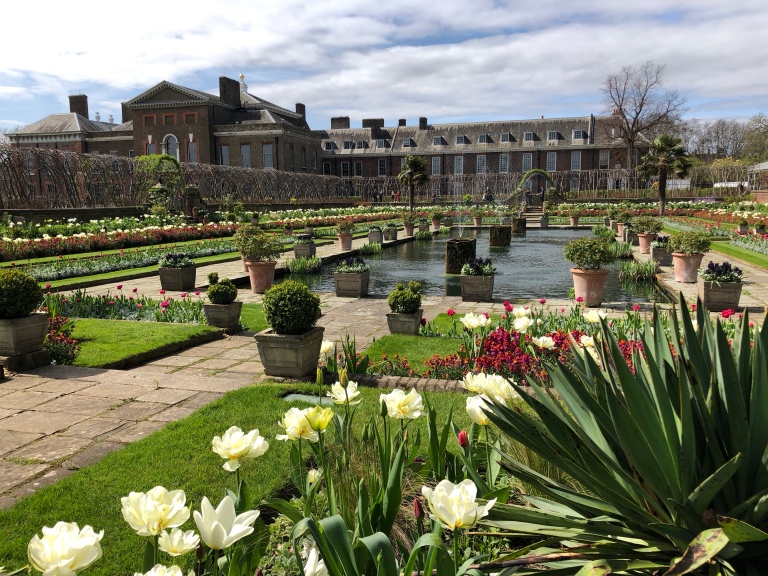 Kensington started out as many other country homes for royalty do, as a get away from the demands of the royal court. Originally, Kensington was a half day carriage ride out from London; now it’s a short distance across the parks to Buckingham Palace or a 15 minute ride on the Tube. The gardens were originally part of the grounds of the royal palace before becoming a part of the Royal Borough of Kensington and a public park. Across the walkway that runs in front of the Palace is a large lake.

The Palace has been a Royal residence for over 300 years and was the birthplace and childhood home of Queen Victoria, who saved Kensington from demolition. The Palace was renovated under her reign and again under Queen Elizabeth!s reign in time to celebrate her diamond anniversary in 2012.

We visited the State Apartments of the King and Queen (who used Kensington prior to Victoria). The English Royal house had long periods of producing no living heirs to the throne, resulting in Parliament extending their invitations of the next Queen or King to other relatives (due to intermarriage between Royal Houses of Europe) of other Royal Houses of Europe (principally Denmark, France, Germany). These foreign monarchs made Kensington their new English home, even when (as in George I who was German) couldn’t speak a word of English.

Stairs up from main floor to apartments on second floor. 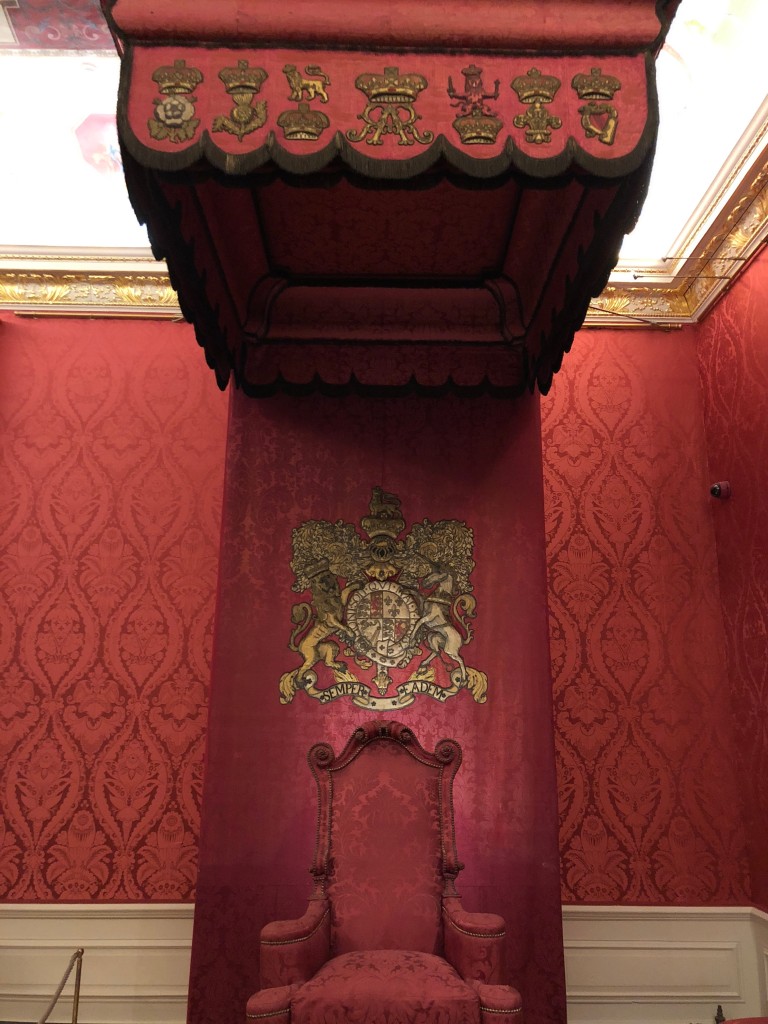 Presence chamber, where the King received both ambassadors and ordinary citizens seeking his approval.

Ladies’ dress during evening court was exceedingly formal and wide! I imagine they had to go through doorways sideways! The amount and opulence of material in their dresses signified (to others), their wealth.

Queen Victoria’s husband/consort was a German first cousin, Prince Albert. They had nine children. Though the Queen was fully the ceremonial head of state (a Constitutional Monarchy) of Great Britain and Ireland as well as Empress of India, Albert became a trusted and capable advisor to the Queen for State business.

His untimely death after 21 years of marriage devastated the Queen. She wore black for the remainder of her life, largely remaining secluded in her royal residences.

Today , Kensington is a showplace for the past and continues with the presence of the Royal Family. Princess Diana and Prince Charles lived here during their marriage and there is a display of her fashion here.

The path out of the gardens to Kensington High Street leads you past the gate where so many left flowers after Diana’s tragic death; there were even flowers here today. 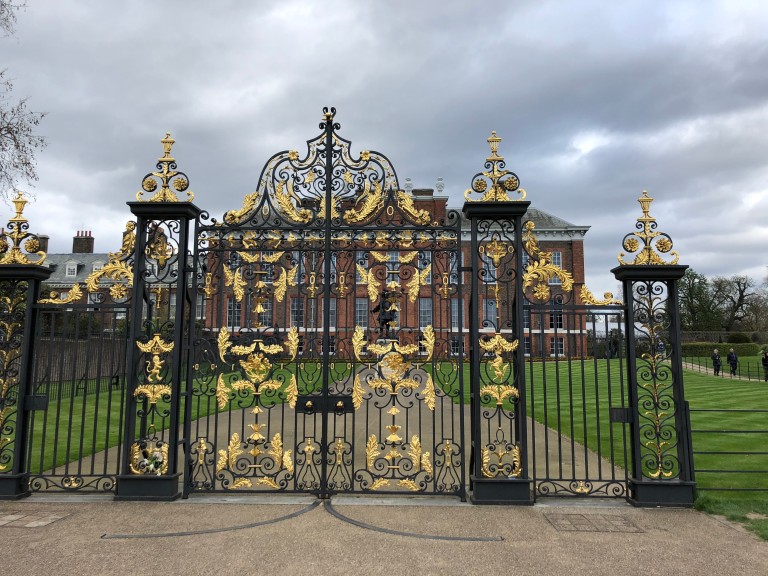