We’re on a 9:30am train to Heidelberg (red drop pin) where we’ll be for one night. Though not a high speed ICE, the train is going 119mph at the moment. 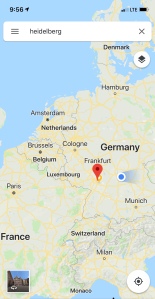 We travel from Nuremberg to Frankfurt (about two hours), then connect to Heidelberg (90 minutes).

We arrived in Frankfurt/Main Hbf , which, surprisingly after all these years, was a train station through which we had not passed. 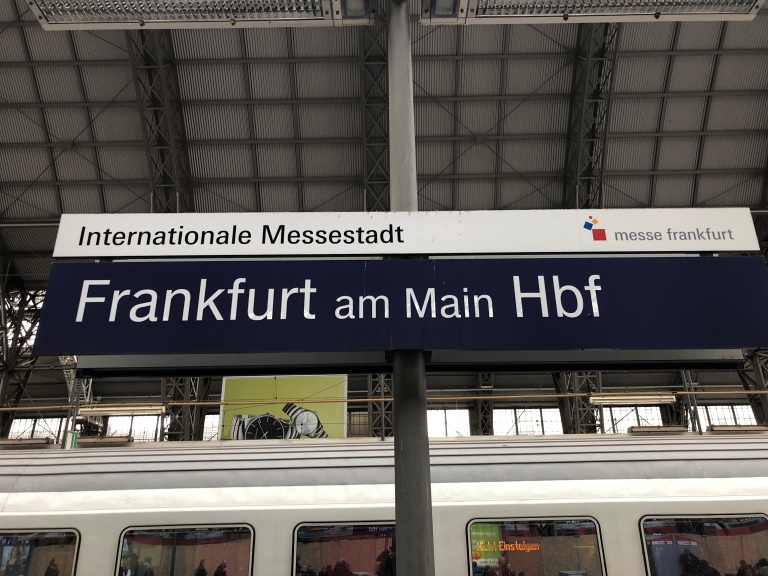 We had enough time between trains to grab some food for the train. The train to Heidelberg is a local and is going to stop at every little stop along the way. It’s SRO and fortunately, it’s not us standing.

We’ve been following the “yellow vest (Gilets Jaunes)” riots in Paris which were prompted by (though not entirely the root cause) rising gasoline taxes. While the government has stood firm at this point, we hope some resolution will soon be forthcoming or we’ll have to be especially careful about where we go while there. Yellow vest refers to the yellow visibility safety vest all motorists in France are required to have in their vehicles. It’s become a symbol of the protests some see as the urban (largely unaffected by gasoline taxes) vs the rural populations.

Just as we arrived in Heidelberg, I received a text message. My life is complete 🤣. I’m being followed on Twitter by Anthony Scaramucci and I certainly was not following him. Must be because he has a new book coming out, drawing on his long running experience (10 days) as Trump’s communications director. Don’t follow him, he’s just hawking a book.

Even though it looked drizzly when we started out from the hotel, #NotDonaldTrump , we’re not afraid of a little rain. We didn’t travel 4,800 miles to wimp out on some rain. It was lightly sprinkling rain on and off again as we walked about twenty minutes towards the Altstadt (old town), but by the time we got to the old town, it was a bit more constant, though never heavy. Christmas Markets, here we come!

There was supposed to be a market at Bismarktplatz, but it wasn’t there. The first Christkindlemarkt we visited was at University Square down the Hauptstraße (Main Street , a pedestrian area). It was after 4:30 and dark. But the stalls were brightly lit and considering it was Monday and drizzly, about as crowded as you might expect. It didn’t stop us from enjoying some gluhweins and ornament shopping. It was also time for dinner so we had some hot bratwurst mit (with) senf (mustard)

We left Universitätsplatz and continued down Hauptstraße towards the Church of the Holy Saint, around which was organized the Marketplatz Christmas market.

There was no question about going to another market, like the Karlsplatz. When we were walking towards the Altstadt, we could see the castle on the mountain, but we were wet enough.

Obviously a very short visit to Heidelberg. I first traveled here with my wife in 1981 on a tour, having no idea then that I had any ties to the area. We were last here in 2002, when we traveled to the tiny village of Eschelbach. In 1880 my 2nd great Grandfather, his wife and nine children left the village where the family had lived (and distant branches of the family still do live) for over 200+ years and everything they had, to travel to a place they would call their new home.

Tomorrow we leave for Paris and le Gilets Jaunes, developing into a very serious situation.