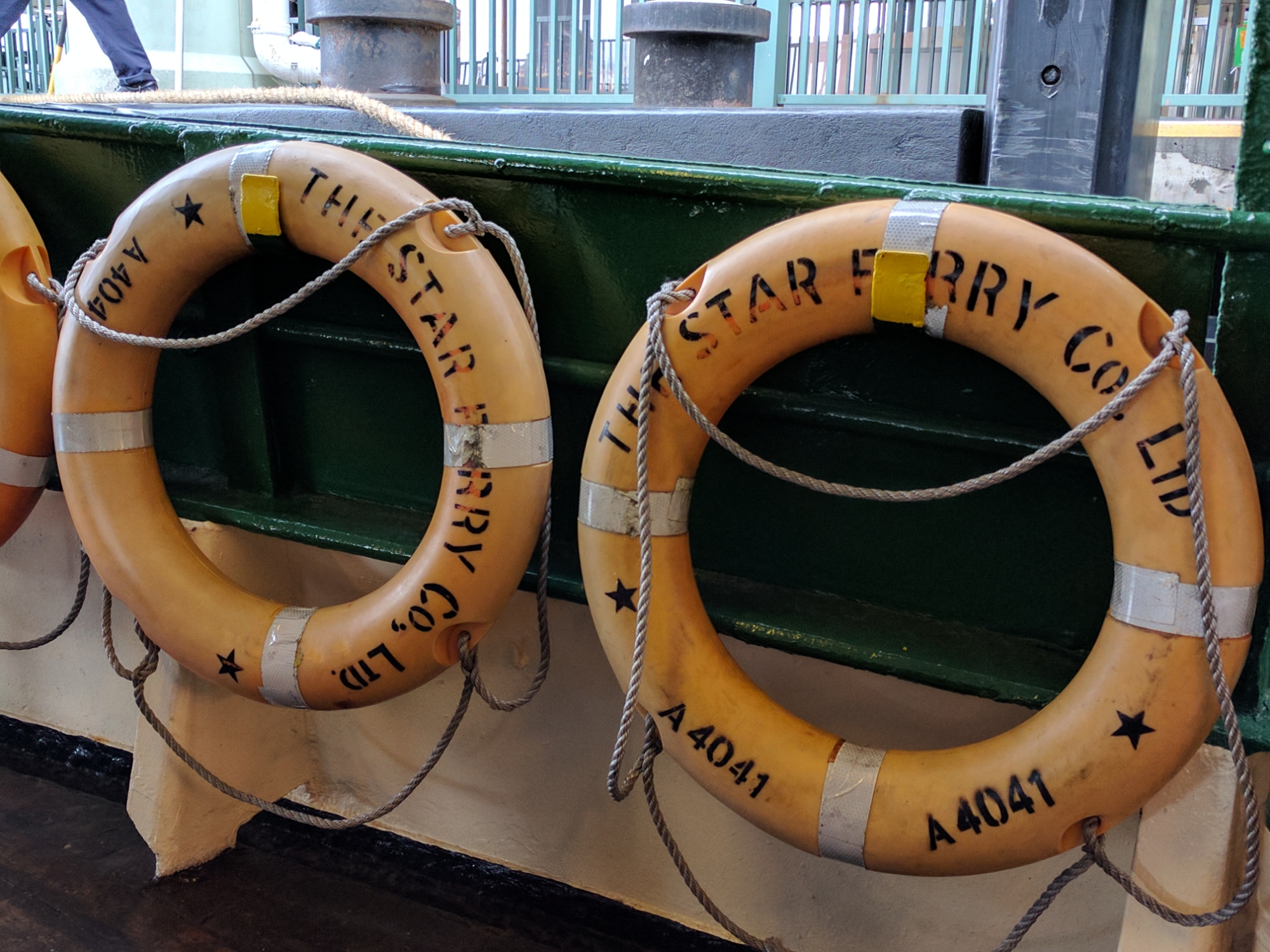 Its a hazy day over the harbour and our last day here. We’re headed out to take one last segment (green tour) of the hop on/hop off bus. The skyscrapers’ upper levels are shrouded in clouds and the mountains are barely visible. It’s a good thing we went to Victoria Peak yesterday!

We’re in Hong Kong nominally during winter. It’s 60 degrees. Fine for walking, but not for being on the upper level of an open air bus.I imagine with seeing the many window unit airconditioners hanging outside the apartments, it would be miserable in the summer without them as it gets up to 34°C and 80% humidity.

Unsurprisingly, there’s virtually no line at the Peak Tram tour stop for going up today with the clouds. Yesterday the line ran across the street.

We’ve passed an array of high end sports car showrooms with Ferrari , Lamborghini, Porsche, Maserati. You certainly see them on the street in the Central area where there are a lot of finance related companies.

We passed the Happy Valley racecourse before going in the Aberdeen tunnel (under Victoria harbor). Across the way is the Happy Valley cemetery (really). I’m sure it’s  full long ago and land is at a premium here.

Crossing under the harbour takes us to the Kowloon peninsula. Fewer massive skyscrapers after you move away from the harbour. There’s a gondola ride up one side of the mountain that links two parts of Ocean Park.

What I heard yesterday but hadn’t thought about is the number of outlying islands that are part of Hong Hong. There are 236 of them, though they are rural and sparsely populated.

Island Road is the narrow, winding coastal road along the South China Sea and Repulse Bay. This was an area ruled by pirates in the 1840’s until the British military drove them off as they threatened commerce.

There are some large apartment complexes looking out across the scenic Repulse Bay, along with a Ferrari dealership. It’s difficult to take photos on this road as the coastal side has vegetation growing along the road side.

We continued on our winding coastal road to the town of Stanley, which was the last part of Hong Kong to fall to the Japanese invasion in WWII, when the British surrendered on Christmas Day, 1941 (Black Christmas). The town suffered mightily under Japanese occupation, roughly halving the population during that time, from 1.2m to less than 600k.

Repulse Bay is a highly valued resort area being 30 minutes from Hong Kong with beautiful sea views. These views come at a price: 20,000 HKD/sq ft.($2600/sq ft). 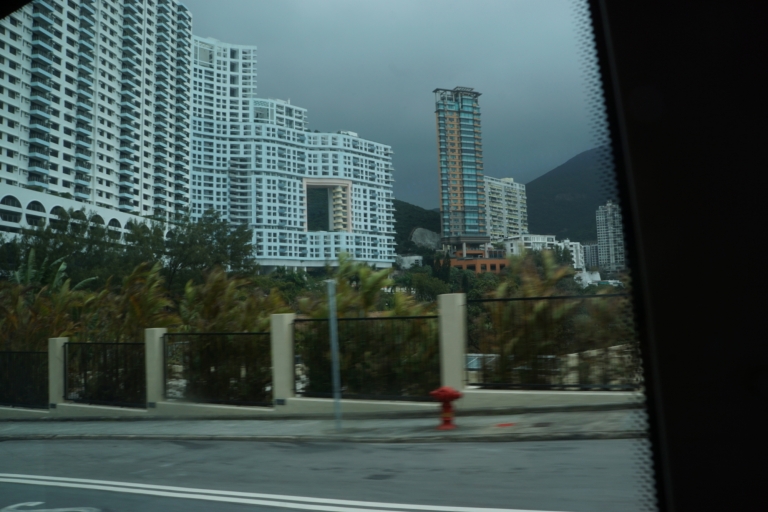 Between Repulse Bay and Kowloon is the Hong Kong Country Club and golf course. Views along the road are really pretty despite the haze that persists.

Though we didn’t see any, the area between Repulse Bay and Aberdeen is where you can still see the Tanka people living on’junks’, though the government is encouraging people to move onto land.

Not everyone in HK lives in the super skyscraper apartment buildings, as we pass several shanty towns.

We pass through (not by) the sprawling University of Hong Kong” established by the British. Instructions are in English, as the University was established to try to give Hong Kong access to Western ways.

We took the Star Ferry back across the harbour to Kowloon and walked through the Harbour City Mall. Yes, yet another high end mall. Not as big as the IFC, but this is the departure point for cruises, so I’m  sure the shops get a lot of traffic around those times. Today, it’s more a refuge from the cool weather for us. The Rolex store had a watch in the window that was just beyond reach at $112,000 US. It had a lot of bling.

Harbor City mall is a lot like the other high end malls we’ve seen, but you would think they’d be over populated. It seems not, as a number of high end retailers have boutiques in several locations. We finally found the sought after location on the HWT, which was actually closer than we thought, though it took a lot of walking to find it.

There’s very little historic Hong Kong. You can find a few places dating back to the colonial British era, but not many. Hong Kong is about the future and seems to be constantly building. So far China’s governance plan seems to have worked.

Late afternoon we had bit of drizzle, so we took a little red taxi back to the hotel. Best $2.75 we ever spent. Cab drivers can only charge what’s on the meter. No tipping is expected.

Tomorrow we have an early flight to…