We had not planned a big day for sightseeing. While we’re out, the hotel is moving us to a different room. Since we didn’t have anything planned for the day we’ll faire une ballade (take a walk). The weather started out with a little drizzle earlier in the morning, though it was not raining when we left the hotel.

On the way to walk towards Place Vendôme and then down rue du Faubourg Saint-Honoré (street = rue) where many high end fashion stores are located, about in the middle of Place Vendôme, a woman walked towards us, bent over and appears to “find” a gold ring someone dropped. Quelle bonne chance (what good luck). Mon Dieu! We’ve seen this scam many times. I didn’t let the conversation go this far, but this is their line-They pretend to find this ring (which was magically not on the ground beforehand) , they ask if you dropped it? No? I will sell it to you for a good price! The last time I laughed at one of them they cursed me. 😅

I’m sure that anyone who travels on subways has experienced this, but it’s both part of the charm and annoyances in doing so. We took the Paris Metro yesterday when going from Gare du Nord to our hotel. When we walked downstairs to the tracks, we could hear someone playing a horn instrument. There aren’t as many musicians playing in the subway tunnels or trains as in prior years (some were really good, some “meh”). As expected this older fellow who was playing the French horn, climbed aboard our car, right in the middle where we stood. He pulled out his smartphone, started some accompaniment music which began to play through the Bluetooth speaker he had hanging from one shoulder, then he began to play his instrument. The second song, he sang! It’s one thing to pass them in the tunnels, it’s another to be forced to listen in the Tube.

Did you know that when Texas was a Republic , they had an embassy in Paris?

The end point of our stroll down rue du Faubourg Saint-Honoré will likely be the Mothership (Hermès), but no increase to the US – French trade deficit is planned (today).

We stopped next door at Bread and Roses, a small cafe where I’ve heard DH’s (dear husbands) are “parked” while their wives are next door at Hermès.

Across the street from Bread and Roses is a very pretty little passage called le Village Royal. There’s a cafe, an art gallery and some shops here.

Now we’re headed back towards Place de la Concorde and the Tuileries.

At the intersection of Place de la Concorde and the Tuileries, there are some plaques in the wall commemorating French soldiers who died in the liberation of Paris in WWII. For some, there’s a brief description of their heroic acts inscribed on their plaque. All, honored as heroes of France. My recollection is that the men honored here were killed on the last day of the liberation ; the Germans surrendered Paris to the Free French army and General Charles de Gaulle on August 25, 1944. Despite repeated orders from Adolf Hitler that the French capital “must not fall into the enemy’s hand except lying in complete debris”, which was to be accomplished by bombing it and blowing up its bridges, Choltitz, as commander of the German garrison and military governor of Paris, surrendered on 25 August, 1944. The world is fortunate that General Choltitz did not follow Hitler’s orders.

From the memorials, we walked to the Tuileries. The park must have thousands of trees. The trees are arranged so that the wide center path down the park is open and unshaded, while along the sides, shaded walkways allow visitors to stay cool, relaxing at one of several cafes shaded by the umbrellas of the tall trees, or children ride the merry go round. Les arbres sont en fleur –the trees are in bloom. When the wind picks up a bit, it seems to be “raining” petals. People relax, play games.

Later, in the peak of summer on a day like this, the Tuileries will be jam packed. For now, we enjoy the relatively uncrowded park and the beauty of spring in Paris 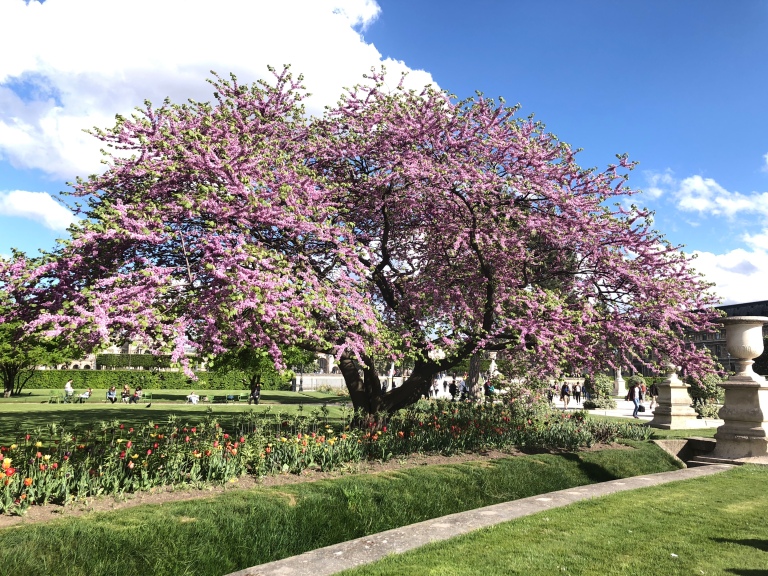 One thought on “Paris Day 2”